A conversation on the state of autism research

At the International Neurotoxicology Conference Oct. 30-Nov. 2 (see related story below)the Environmental Factor sat down for an in-depth interview with Health Science Administrator Cindy Lawler, Ph.D., of the NIEHS Division of Extramural Research and Training. Lawler leads a portfolio of autism-related research, and she shared her thoughts about the meeting and the state of the science. 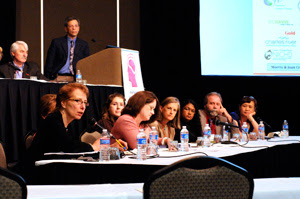 
The Factor: The content of this meeting seems to fit in well with the NIEHS mission and current research portfolio.

Lawler: “I think it does. We have had a very healthy investment in neurodevelopmental toxicology for many years, but environmental insults are not often going to lead to a frank disease. Many of the outcomes we’re looking at are more subtle, such as cognitive impairments. We are making inroads into how environmental insults potentially contribute to clinical disorders — autism is one example, but there’s work in the ADHD field as well, and now schizophrenia.”

It seems that the field has moved beyond whether environmental insults have an impact upon those disorders to more focused research on specific interactions and mechanisms. Is that an accurate assessment?

“I think that’s a very insightful comment. When I came to NIEHS ten years ago, people were beginning to be concerned about the big rise in autism. Every paper on autism was about genetics, genetics, genetics. And now, although progress is never fast enough, I’m in a position to see what I consider to be very good scientific progress. Even among the autism genetics investigators, there is acknowledgment that environment is involved, and it’s no longer just that we’ll eventually find genetic causes for every single case. In one sense it’s a small step, but there is this acknowledgment that the real answer is going to have to involve looking at both environmental and genetic risk. That doesn’t mean that it’s easy to do — it’s very, very difficult.”

“The real continued progress in autism or ADHD or schizophrenia is, for our Institute, going to depend on the types of developmental tools and approaches that we’re hearing about at this meeting. They are not going to come from researchers trying to look for associations between exposures and disease, they’re going to come from, for instance, the exposure science arena, where people are developing better ways to capture exposures in the same way that you can capture the whole genome.”

Do you think any of the ideas we’ve heard about at this meeting approach being ready for translation into prevention, therapy, or even public health policy?

“I think most of what we’ve heard here is meant to be provocative. There’s a solid foundation of proof of principle. For example, there’s every reason to believe that the immune system is dysregulated in autism. And there’s increasing evidence that disrupted thyroid signaling is involved somehow. But thyroid signaling is incredibly complex, and the clinical phenotypes that are present are complex as well.

In the case of how that might apply to something like autism risk, it’s really difficult to see how at this point in time you could apply that knowledge directly. That doesn’t mean that that’s not where we hope to go with it, but I think now it would be a little premature to think about a lot of direct translation to the clinic.

In the case of endocrine disruptors, our Institute has a really strong interest in that, but they are a class of chemicals that has not been a major focus of work in the autism arena. There’s been a little bit of work with compounds that act through the thyroid, affecting hormone signaling, but overall they’ve been a little bit neglected, so this meeting is meant to stimulate interest.”

(Ernie Hood is a contract writer for the NIEHS Office of Communications and Public Liaison.)

The time for characterization of the role of environmental factors in neurodevelopmental disorders has come. This was the take-home message of the 27th International Neurotoxicology Conference Oct.30-Nov. 2 at the Sheraton Imperial Hotel and Convention Center in Research Triangle Park (RTP), N.C. NIEHS and Environmental Health Perspectives were among the sponsors (http://www.neurotoxicology.com/conf2011/sponsors.pdf) (323 KB) of the event, titled “Environmentally Triggered Neurodevelopmental Disorders: Focus on Endocrine Disruption and Sex Differences in Autism, ADHD, and Schizophrenia.” 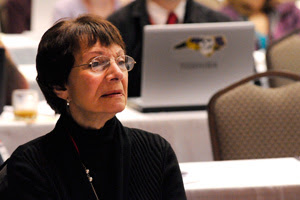 
The conference was last held in RTP in 2005, and according to NIEHS program administrator Cindy Lawler, Ph.D., (see related story above)holding the conference locally boosted attendance to more than 200. “We were able to draw from the local universities, and a number of our intramural scientists came to hear the talks, as well,” she said. “The program resonates, as these are issues that NIEHS has made significant investments in — especially autism.”

Conference co-chair Isaac Pessah, Ph.D., a professor of molecular biosciences and director of the Center for Children’s Environmental Health and Disease Prevention at the University of California, Davis, found the dialogue that took place to be the meeting’s greatest value. “What’s unique about this meeting is that it brought this crosscutting paradigm, and I think a lot of the attendees really got a lot out of it, because you don’t usually present it that way,” he said. “Usually, there’s an autism meeting, there’s a schizophrenia meeting, there’s an ADHD meeting, and they are never brought together with the questions about what are the commonalities and what are the differences.”

Thomas Zoeller, Ph.D., of the University of Massachusetts Amherst, who co-chaired the plenary session on endocrine disruption in autism spectrum disorders, agreed with Pessah, and said that the flow of ideas at the meeting among scientists who don’t normally talk to each other had a profound effect upon his own thinking. “I’ve really changed my perspective about the way that the environment might impact brain function,” he said. Both he and Pessah are NIEHS grantees.

With so many topics of interest to NIEHS on the agenda, the Institute was well-represented at the conference. Serena Dudek, Ph.D., head of the NIEHS Synaptic and Developmental Plasticity Group, provided attendees with a tutorial on synaptic plasticity as a common target in neurodevelopmental disorders.

Jean Harry, Ph.D., group leader of the NTP Neurotoxicology Group, served as one of the meeting’s poster session co-chairs and networking mentors, and also co-chaired a session on developmental neurotoxicology mechanisms. Mamta Behl, Ph.D., and Christopher McPherson, both of whom work with Harry, were recognized at the meeting with a postdoc presenter award and graduate student poster award, respectively.

Also, David Goulding, of the Comparative Medicine Branch, presented a poster on his work with Harry on neurobehavioral phenotyping of mice. Harry’s former student Steven Szabo, M.D., Ph.D., who is now a psychiatry resident at Duke University, also gave a platform presentation and presented a poster based on his work with Harry on the potential therapeutic benefits of lithium for trimethyltin neurotoxicity.

(Ernie Hood is a contract writer for the NIEHS Office of Communications and Public Liaison.)

http://www.niehs.nih.gov/news/newsletter/2011/december/science-neurotox27/
Posted by Jim Watkins at 10:43 AM