The United Nations is recognizing the need for "Elder Abuse Awareness Day", with the following posted as part of a dedicated webpage. 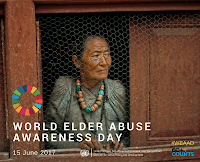 Virtually all countries are expected to see substantial growth in the number of older persons between 2015 and 2030, and that growth will be faster in developing regions.1 Because the numbers of older persons are growing, the amount of elder abuse can be expected to grow with it. While the taboo topic of elder abuse has started to gain visibility across the world, it remains one of the least investigated types of violence in national surveys, and one of the least addressed in national action plans.
Recent research findings draw specific attention to financial exploitation and material abuse of older persons as a common and serious problem. Based on available evidence, 5 to 10 per cent of older people globally may experience some kind of financial exploitation.3 However, such abuse often goes unreported, partly due to shame and embarrassment on the part of the victims or their inability to report it because of cognitive and other impairments, and most prevalence studies are based on self-reported surveys.
Financial exploitation takes many forms. In developed countries, the abuse often encompasses theft, forgery, misuse of property and power of attorney, as well as denying access to funds. The overwhelming majority of financial exploitation in less developed countries includes accusations of witchcraft that are used to justify property grabbing, ejection from homes of and denial of family inheritance to widows. Risk factors for falling victim to financial exploitation range from social isolation and cognitive impairment to emotional or physical dependence on the perpetrator, financial dependence of the abuser on the older person, certain living arrangements, poverty, widowhood and lack of support networks, in addition to ageism and other types of prejudice, discriminatory inheritance systems, as well as weak police and criminal justice systems.
In particular, this year’s theme underscores the importance of preventing financial exploitation in the context of elder abuse to the enjoyment of older persons’ human rights. In line with the 2030 Sustainable Development Agenda and the Madrid International Plan of Action on Ageing, older people have the right to a life of dignity in old age, free of all forms of abuse, including financial and material exploitation, which could lead to poverty, hunger, homelessness, compromised health and well-being, and even premature mortality.
The 2017 WEAAD theme will explore effective means of strengthening protections against financial and material exploitation, including by improving the understanding of this form of elder abuse and discussing ways of ensuring the participation of older adults themselves in ending victimization. It will further serve to inform the thematic discussions of the upcoming eighth session of the General Assembly’s Open-ended Working Group on Ageing, which will take place in New York from 5 to 7 July 2017.
Objectives
Mission Statement
Statement of Ms. Rosa Kornfeld-Matte, Independent Expert on the human rights of older people, on the occasion of World Elder Abuse Awareness Day 2017
The Geneva NGO Committee on Ageing will commemorate World Elder Abuse Awareness Day on the theme “Violence against older persons, a human rights issue” on 15 June, 1-3 pm (Geneva time):
The U.S. Department of Justice is recognizing the need for Elder Abuse Awareness Day, For information and resources, visit: https://www.justice.gov/elderjustice
U.S. Department of Justice chart for U.S. seniors.

Email ThisBlogThis!Share to TwitterShare to FacebookShare to Pinterest
Labels: Seniors