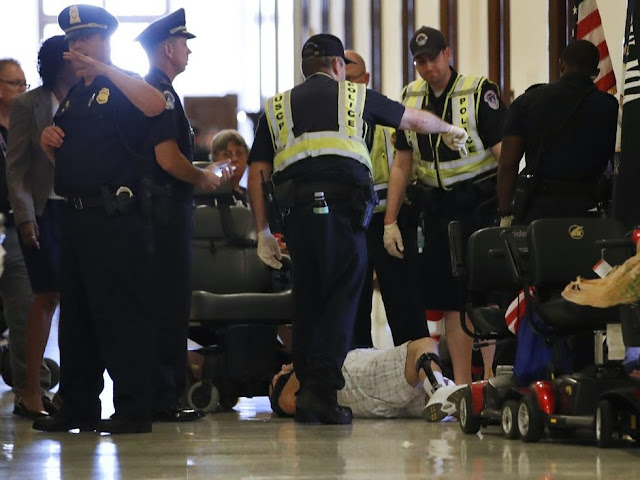 Capitol Police prepare to remove a man from a sit-in of Senate Majority Leader Mitch McConnell's office, as he and others protest proposed caps to Medicaid Thursday, June 22, 2017, on Capitol Hill in Washington. (AP Photo/Jacquelyn Martin)
WASHINGTON (AP) — The Latest on Senate Republicans' health care bill (all times local): June 22, 2017 - 1:30 p.m.
U.S. Capitol Police are arresting dozens of people who are protesting cuts to Medicaid in the Senate Republicans' health care bill.
The protesters have filled a hallway in one of the Senate office buildings, outside the office of Majority Leader Mitch McConnell of Kentucky.
Some of the protesters are being escorted individually. Others are much more reluctant to leave and it's taking four or five officers to carry them out.
The protesters are yelling "no cuts to Medicaid" as they are being led away.
One protester says he's with the disability rights group ADAPT. Phillip Corona says he traveled from Wisconsin to make his voice heard. Corona says Medicaid helps his son Anthony get out of bed every morning. Phillip Corona fears that changes to the program "would possibly mean putting him in a nursing home."
Alison Barkoff — director of advocacy for the Center for Public Representation — helped organize the protest. She says the protesters rely on Medicaid to help them live and she says the health bill amounts to "tax cuts for the wealthy on the backs of people with disabilities."
# # #
HUFFPOST
Police Haul Off Protesters, Some With Disabilities, From Mitch McConnell’s Office

The crowd was protesting the health care bill that Senate Republicans had written in secret at McConnell’s direction. Judging by photos and video from reporters, the senator’s staffers didn’t appreciate their presence.

Police reportedly arrested more than 20 protesters, many of whom were in wheelchairs and on respirators

A draft of the health care bill, released this morning, shows Republicans intend to dramatically cut back on Medicaid and other safety nets, then funnel that money to the richest Americans. 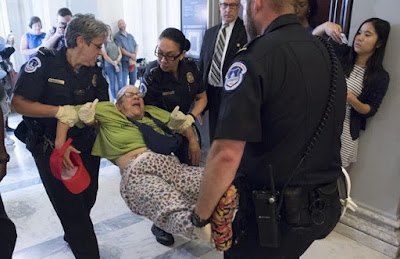 The information posted is a portion of an article by  Ryan Grenoble for HUFFPOST , for the FULL article with many photos; CLICK HERE
Posted by Jim Watkins at 4:51 PM