ADAPT, a national disability rights organization, organized a protest to fight back on the health care bill.

As Senate Republicans rolled out the Better Care Reconciliation Act, their health care reform proposal, on Thursday, the halls outside the office of Senate Majority Leader Mitch McConnell were starting to get a little crowded. Sixty disability rights activists from grassroots group ADAPT, many of whom were using wheelchairs, staged a "die-in" to protest steep Medicaid cuts in the bill. They were arrested and removed by Capitol Police, with witnesses saying that some protesters were dropped by police officers dragging them from their chairs. 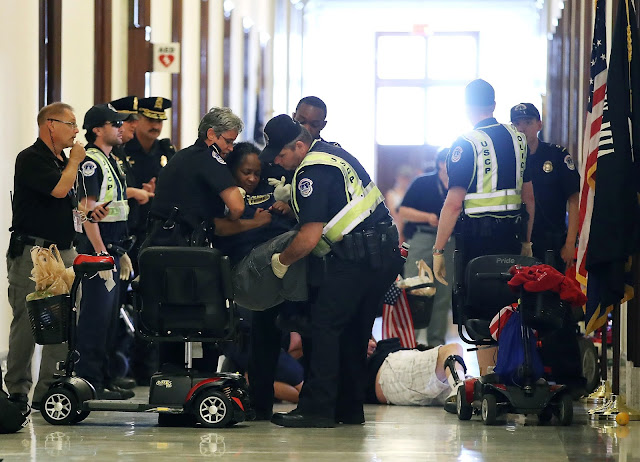 Bruce Darling, an ADAPT organizer who participated in the die-in, tells Rolling Stonethe group took less than a week to coordinate. "It's truly un-American that the Republicans in Congress are trying to steal from disabled Americans to give to wealthy people," he says, describing the impetus behind the protest.

While ADAPT may not be widely known outside the disability community, the group has been fighting for disability autonomy since the 1970s, representing the 20 percent of the U.S. population that lives with a disability. The 43-year-old organization has engaged in thousands of direct actions like this one across the country. In Washington alone this year, protesters were arrested outside the White House in May and dragged from the Capitol Rotunda in March at the behest of House Majority Leader Paul Ryan (R-WI).

This protest comes with high stakes: Both the House and Senate "Trumpcare" bills propose radical changes to the American health care landscape that would hit disabled Americans first, and hardest. Some of the deepest cuts are to Medicaid, the entitlement program developed in 1965 to provide health coverage to low-income Americans. The Affordable Care Act allowed states to opt in to an expansion that brought more Americans into state Medicaid programs, and both the American Health Care Act (AHCA) and BCRA threaten to roll back that expansion.

At the same time that Trumpcare will kick millions people off Medicaid, contributing to a spike in the uninsured rate in America, it’s also promoting block granting as a funding model. Republicans say block grants, in which states receive a bulk disbursement of federal funds to spend on health care, increase flexibility. In one sense, they do: They allow states to decide what they want to stop covering, and to severely limit the availability and nature of Medicaid coverage to residents.

This is worrying for low-income people with complex health care needs – and with 27 percent of disabled people living in poverty, that means a disproportionate number of disabled Americans. ADAPT isn't just concerned about whether disabled Americans will be able to access health care services, however. The group also believes that Medicaid austerity will push disabled people into institutional settings for care. It’s fitting that this protest coincides with the anniversary of 1999's groundbreaking Olmstead v. L.C., the Supreme Court case that affirmed disabled people have a right to live in the community.

The fight for deinstitutionalization has been a core of disability rights activism for decades. Disabled Americans argue that being able to decide where you live should be viewed as an intrinsic civil right. Historically, people with complex needs have been forced into residential facilities by bureaucratic policies that limited coverage for so-called home and community-based services (HCBS). Medicaid, for example, would refuse to provide coverage for aides and other supports in the community, while still paying for nursing home care. People who couldn't afford this care on their own had only one choice: Disappearing into an institution.

"If you have a car accident ... if something happens to you," says Darling, "Do you think it's appropriate for the government to say you shouldn't have the same right to life and liberty?"

Aside from being a question of human rights, this is also a question of cost, something that should appeal to budget-conscious Republicans. According to 2012 analysis by the National Council on Disability, a nonpartisan federal agency, it is substantially less costly to allow disabled people to live in their communities. In some states, it can cost over $300,000 annually to institutionalize a single disabled person – and that person could get community-based care for as little as $21,000.

Disability justice and fiscal conservatism, in this case, have a lot in common. This is also an issue much bigger than disability. Drastic cuts to Medicaid will hit seniors hard as well, and they'll cause drastic changes at many community hospitals. Medicaid funding is also used for activities like supporting education for disabled students, indirectly improving education for all students.

Over coming days, argument over the language in the bill surrounding Medicaid reform may be fierce. Changing the structure of this entitlement program could save the federal government billions of dollars in the short term, but only at great cost to society.
http://www.rollingstone.com/politics/news/why-disability-rights-activists-stormed-mitch-mcconnells-office-w489441
Posted by Jim Watkins at 4:46 PM