ALGONQUIN, Ill. — Memorial Day is a time to remember our nation’s veterans, those who have gone to war to help keep the country free.
But Sunday, a north suburban vet had an experience that shows not everyone remembers. And what happened to him at an Algonquin restaurant should serves a reminder to us all. 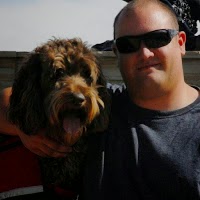 Garrett Loughran (photo) of Huntley has served four tours in Iraq and Afghanistan. And like a lot of veterans, Garrett uses a service dog to help with his PTSD, post-traumatic stress disorder.
Hershey, a 5-year-old labradoodle, helps keep him calm in crowds and adjust to civilian life. He’s no ordinary canine. In fact, he’s specially trained for this. By law, he’s allowed to go where Garrett does— no questions asked.
But yesterday, Garrett’s mom wanted to take him to a pre-Memorial Day lunch at the Houlihan’s in nearby Algonquin.. And that’s when things got a little touchy. The veteran, his mom and his dog were turned away.
“He had his red cape on that said he was a ‘service dog,’” said Laura Wills, Garret’s mother. “We have the papers with us but she just said ‘Well, we don’t allow dogs in the restaurant. What type of service does he provide?’ And my son said ‘You’re not allowed to ask that.’”
“I expected that by this day and age that everybody knows what service dogs are and they should be more accepting of veterans like me who have to have a service dog to acclimate themselves to this new world again,” Garrett said.
When the family complained about the treatment they received, the restaurant chain wasted no time in responding. They apologized profusely. And, in a letter to the family, a senior manager writes,

There is no apology that is sufficient in this circumstance. This is inexcusable. I will ensure this is addressed and that no other person has to endure what you and your son did today.

To be perfectly clear:  Houlihan’s supports and appreciates all veterans and the sacrifices they have made and continue to make for this country.  We have and will always allow service dogs in our restaurants.

Houlihan’s says the manager involved in turning Laura, Garrett and Hershey away has been fired and it’s donating $2,000 dollars to the organization Pets for Vets. That’s the cost of training one service dog for a veteran who needs one.
Garrett says he considers that extremely generous and the amount of awareness raised by all this to be priceless.
http://wgntv.com/2015/05/25/veteran-service-dog-turned-away-from-restaurant-worker-fired/
###
Questions: While the corporation acted fast and appropriately, what type of training program is in effect at Houlihan's Restaurants concerning People with Disabilities?
Facebook: https://www.facebook.com/houlihans
Posted by Jim Watkins at 5:06 PM