RJ Anderson Jr. tests out his exoskeleton at the Rehabilitaiton Institute of Chicago.
View Full Caption
DNAinfo/Andy Roesgen/Provided
RIVER NORTH — Sgt. RJ Anderson Jr. just got tired of sitting there, having people stare at him with pity.
After a 2012 motorcycle accident left the River North resident paralyzed from the chest down, he refused to slow down. Anderson traveled the world, participating in paraplegic sporting events, even snapping a picture with Prince Harry at the Invictus Games of London and sky-diving.
But he never lost sight of his true goal: the simple act of walking. 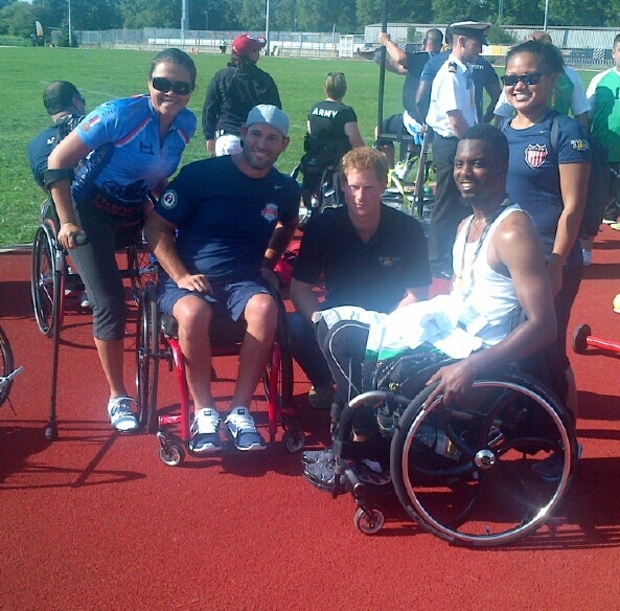 Anderson (r.) with Prince Harry at the Invictus Games. [Provided]
The Roseland native remembers the day the doctor delivered the dreaded news: He would never walk again.
"Well, I'm not gonna say the words I used to the doctor," the 33-year-old said with a wry smile, and a military demeanor. "But I disagreed with him, he didn't know me. I had no doubts in my mind that I would walk again."
Anderson came to Streeterville's Rehabilitation Institute of Chicago last fall, looking for help. They suited him up with an "Exoskeleton" made by a company called Re-Walk. It's a "Iron Man"-like device that comes with a backpack that supplies the power, and gets charged like a cell phone; a wrist device with three buttons: "sit", "stand" and "walk"; and two side power attachments for each leg, one along the thigh and one along the lower leg.
[DNAinfo/Andy Roesgen]
Anderson hits the "stand" button and the device "whirs" to life. His brain is not sending signals to his lifeless legs, but by leaning slightly forward, as with a Segway machine, he's activating the "walk" motion. You half-expect to hear RoboCop's exaggerated sound-effect foot steps as he moves. And through training with a therapist, Anderson's been able to make the device intuitive to his movements.
Dr. Arun Jayaraman, a research scientist at the Rehabilitation Institute of Chicago, first started working with the Exoskeleton when it was developed about four years ago. It sounded promising, he said, but as with any new device, the kinks had to be worked out. And of the roughly 100 patients who've applied to use the device in a trial, only 14 are now working with it at RIC.
"RJ's got this super-athletic ability that puts him in the sweet-spot of balancing the device, so you're almost like a ballet dancer. You've got to be in sync with the device. Once you're in sync with it, you can climb stairs and do a figure-8, but if you're not in sync, it's a struggle." 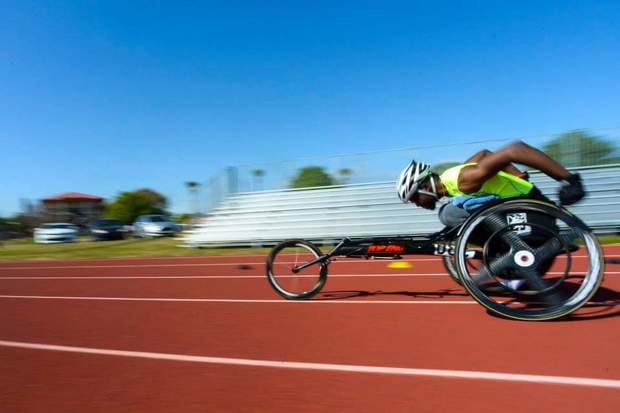 Anderson remained active and athletic after his accident. [Provided]
Unlike Anderson, Dr. Jayaraman has worked with exoskeleton patients who've spent decades in a wheelchair. To see them up and walking is "mind-blowing" for them and their relatives. And he says passersby no longer look down on them in pity; instead, it's now a look, eye-to-eye, with "awe and excitement. 'Whoa, that's a cool robot he's got.'" That's not a scientific result, says Dr. Jayaraman, but it's a vital "human" result.
The device costs $70,000, and RJ's was donated anonymously. Right now, he can walk without any assistance. But the FDA currently requires that someone be close by, just in case. Still, "It's amazing. I never thought things would work out this fast."
"Just going for the ride, that's the best way for me to explain it," says Anderson of the feeling. "I don't bear any weight of the device, it bears its own weight."
For the moment, Anderson's lung capacity allows him only about an hour on the Exoskeleton each day, but just this week, he's finally able to use it at home, to do the mundane things that able-bodied people take for granted.
And here's something to think about as we all get older: Dr. Jayaraman predicts that in the next five years, there will be Exoskeleton models available for just ordinary folks who have trouble getting around, and who need a walker or a cane, and at a much cheaper price.
Anderson's ultimate goal is far more ambitious: running a marathon in the device. But for now, "Just being able to wake up and say, 'hey, I'm gonna go for a walk down the street.' It's amazing."
http://www.dnainfo.com/chicago/20150513/river-north/this-70000-battery-powered-exoskeleton-lets-paralyzed-man-walk-again?utm_source=Chicago&utm_campaign=e078bc127b-Mailchimp-CHI&utm_medium=email&utm_term=0_4061d3bea7-e078bc127b-174002865
Posted by Jim Watkins at 9:27 AM