The information posted is from various sources, and updates will be posted as available ...

In 1980 a group of restaurateurs approached the Mayor of Chicago with the idea of a food festival on the Fourth of July, and Taste of Chicago was born. Inspired by a “build it and they will come” attitude, a $150,000 budget, and confidence the event could attract 75,000 people, plans for the one-day food frenzy got under way. The festival was held in a three-block area of Michigan Avenue bordered by the Chicago River and the upscale stores and buildings that were then beginning to grace the Magnificent Mile; and between the architectural wonders of the Wrigley Building and Tribune Tower.

Due to the overwhelming response from the people of Chicago, a larger space to accommodate even more people and restaurants was deemed necessary and in 1981, Taste of Chicago was moved to Grant Park (Chicago’s “front yard”).

Grant Park is centrally located, easily accessible to public transportation and parking, and is identifiable to citizens and visitors as the center of the Grant Park Cultural community which includes the Art Institute, Adler Planetarium and Shedd Oceanarium, Field Museum, Cultural Center, Michigan Avenue and State Street Shopping. The use of Grant Park as a venue would also afford utilization of the Petrillo Music Shell, originally designed for us by the Grant Park Symphony Orchestra. This would handily give access to a stage, dressing rooms and showers for performers, as well as seating for thousands of people.

Description of Taste of Chicago

The Taste of Chicago that evolved from that steamy July 4th in 1980 is one of the largest tourist attractions in Illinois. This free- admission festival, now in its 33rd year, is the place to be, infusing the city with a spirit and attracting lead stories each day in newspapers and on television.

It is an impressive scene. Colorfully decorated food booths surround the outside kitchens of more than three dozen restaurants from all over Chicago, which now include Pop-Ups, three booths featuring new restaurants each day, that are also new to Taste. Exotic aromas permeate the air and no visitor leaves a food booth empty handed.

Last year’s “Taste” attracted more than one million visitors from all over the city, the suburbs, the Midwest and the country.

Taste underwent a major transformation in 2013 with several new areas that highlight our vast culinary community. In addition to Pop-Ups, the event features Celebrity Chef du Jour, a specially designed air-conditioned dining experience where patrons can receive a sit-down, three-course meal prepared by noted chefs such as Graham Elliot and Stephanie Izard.

The Family Village presents special activities for kids, while the Bud Light Stage offers the best in local and regional music, covering a variety of genres.

For festival goers who want to satisfy more than their appetites, a popular attraction is the Dominick’s Cooking Corner where local chefs, guest stars and our celebrity chefs demonstrate their wares and confide the secrets of their culinary success.

A star attraction in addition to Chicago’s vast culinary offerings are real stars from the music industry who perform on the main stage at the Petrillo Music Shell. Over the years the lineup has included multiple Grammy winners including such stars as Carlos Santana, Stevie Wonder and Wilco.

Summer in Chicago is built around one event each year, Taste of Chicago, and continues to capture the favorites and the future of Chicago’s restaurant and dining community.

Sights, Smells and Sounds
The big attraction? The food, of course! Chicago-style pizza and hot dogs as well polish sausage and dozens of other ethnic specialties are the star of the show as over 70 restaurants from around Chicagoland offer up more than 300 of their menu's best dishes to an appreciative audience.
Admission is free to Taste of Chicago, although "Taste Tickets" must be bought to purchase food and drinks during the 10-day bash (cash is not accepted.)

2014 Concert Lineup
Other events during the annual summer festival in Grant Park include free performances of live music at the Petrillo Music Shell, as well as other stage venues featuring local as well as nationally-known big name performers.

The official Taste of Chicago concert lineup was announced on April 21, 2014 with tickets going on sale in mid-May. Concert price admission has jumped recently to $50 for tickets in front of the Petrillo Music Shell. A majority of seats on the lawn beyond, with a capacity of 30,000, remain free.


The Taste of Chicago lineup includes: 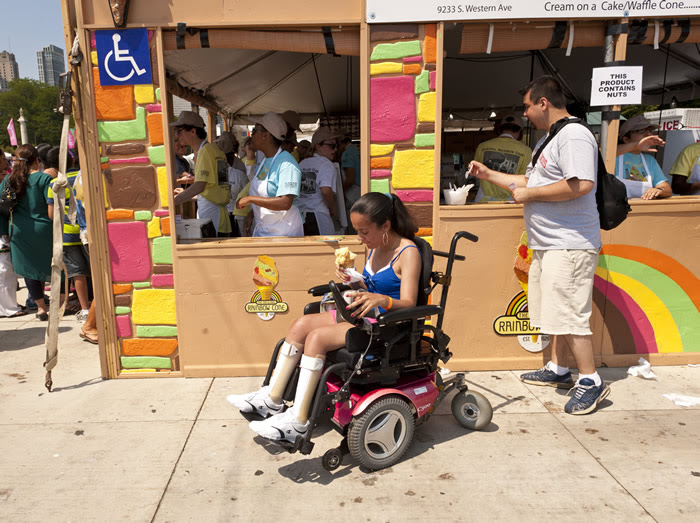 Each Taste of Chicago booth has an accessible counter.

Accessible seating tickets are available to purchase for the evening concerts at the Petrillo Music Shell.

Find out more information on accessible seating at the Taste of Chicago.

Where is the transportation drop off and pick up located? For Paratransit and vehicles transporting people with disabilities, the location is at the southeast corner of Monroe and Columbus.

Where can I park? Parking for the public at Taste of Chicago is located at the Millennium Garage; entrance is on Columbus.

What materials are provided to people with disabilities who come to the Taste of Chicago?

Entrance into the festival is free admission.

Food and beverage tickets are sold in strips of 12 tickets for $8 (includes $2 charge for Taste amenities). Ticket sales end at 8:30pm.

Smaller "Taste of Portions" are available at each food vendor and are between 1-5 tickets.

1. What items are prohibited from being brought onto festival grounds?

Failure to comply with the above may result in entry being denied. All containers will be subject to search. Bicycles may not be ridden on festival grounds.

2. Can I bring a folding chair and blanket into the festival? Yes, but folding chairs are not allowed in the seating area of the Petrillo Music Shell.

3. Can I bring a tent into the festival? Personal tents and canopies are NOT allowed at any lakefront event.

4. Can I bring my dog with me into the festival? No. For your dog's protection and for the public's safety, all dogs (except service animals) are restricted from the festivals and you will be asked to leave the festival with your dog. (This policy is supported by the Anti-Cruelty Society.)

5. Is there an admission fee to get into the festival grounds? No.

Where is the transportation drop off and pick up located? For Paratransit and vehicles transporting people with disabilities, the location is at the southeast corner of Monroe and Columbus.

Parking
If you are driving, park directly under the action at Millennium Garages. Visit www.millenniumgarages.com for details.

Biking
Bike parking is available on the perimeter of Grant and Millennium Parks. Visit the Chicago Bicycle Program for maps, safety, and other information.

How do I purchase a ticket for accessible seating?
http://www.ticketweb.com/snl/EventListings.action?pl=taste&orgId=147622

What are the requirements to purchase these tickets? A limited amount of general admission accessible seating will be provided in the front rows near the main stage as well as seating disbursed throughout the rest of the seating area for people with the following types of disabilities:
Is the lawn seating accessible? Yes, the lawn area for the Petrillo Music Shell shows is accessible and FREE to the public.

What materials are provided to people with disabilities who come to the Taste of Chicago?