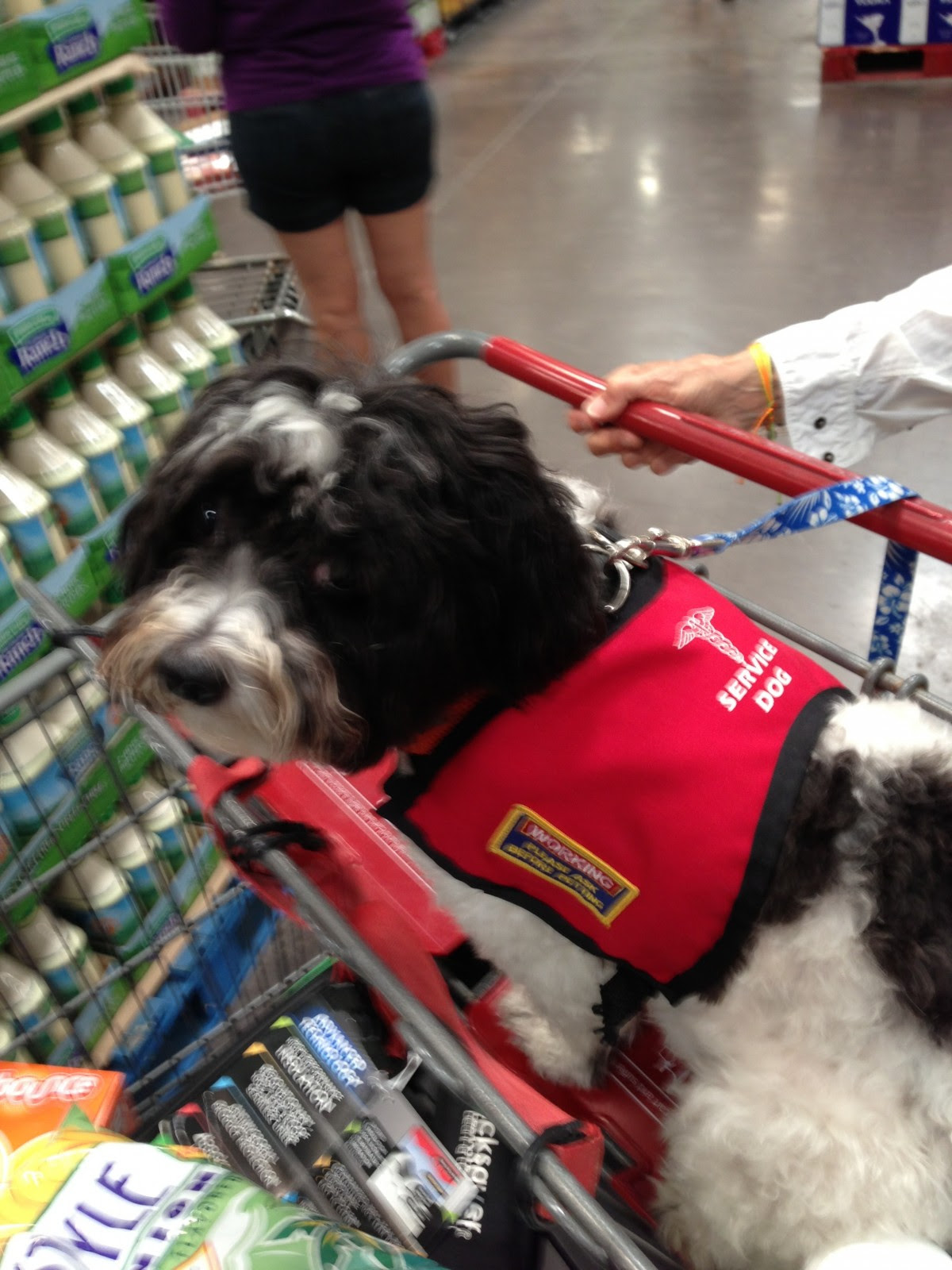 We’ve all seen them:

Jittery, agitated little poodles and other small canines wheeled around in shopping carts, growling with impunity thanks to a fairly recent first-world invention:
The faux “service dog” vest.

Inquire with their owners about what service they provide, and you’re sometimes met with a vague explanation like, “Kiki warns me when I’m about to have an anxiety attack.” Meanwhile, Kiki is freaking the hell out.

Sometimes, it can be hard to tell who really needs the medication.

Furry Imposters
With service dog vests and custom-made ID patches available on Amazon.com for less than $50, anyone with an especially strong attachment to their pooch (and a smidge of disposable income) could conceivably strap up their shih tzu and at least attempt to breach the walls of the closest coffee shop.

There are, of course, a myriad of potential hazards presented by non-service pooches sniffing their way through Starbucks.

Apart from increasing the risk of ill-timed barks and random leg-humping in a retail environment, untrained pups can of course end up tangling with genuine service animals like seeing-eye dogs, causing potential headaches and hazards for people who depend dearly on their well-trained companions, who sometimes need up to a year and a half of schooling before hitting the streets.

Unfortunately for business owners, there is limited regulatory guidance for what constitutes a real service animal, and even less on how to sniff out imposters.

The Law of the Paw (In Public)
Current Hawai`i state law is sparse in its attempts to limit the use of service dogs, classifying them as “any dog that is individually trained to do work or perform tasks for the benefit of an individual with a disability.”

Apart from not adequately defining what constitutes a disability, state law also fails to lay down any rules or requirements for the training or certification of service animals.

But this lack of clarification may not be the fault of cat-napping lawmakers. Instead, it may simply be due to the state being muzzled by the potent-yet-vague Americans with Disabilities Act, which trumps both state and county laws.

ADA rules mandate that business owners must “allow people with disabilities to bring their service animals onto business premises in whatever areas customers are generally allowed.” 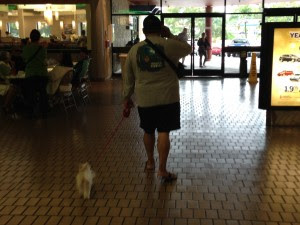 Seven pounds of pure “service”? Photo by Nate Gaddis.
Recent clarifications to the law have narrowed the ADA’s definition of a service animal strictly to canines, with some exceptions for miniature horses (yes, you read that correctly).

In any case, the ADA defines a service dog as one which is “individually trained to provide assistance to an individual with a disability.” Under federal rules, dogs need not be licensed or certified by a state or local governments.

According to the ADA, if someone enters an establishment with a service dog, business owners and their employees are only allowed to ask two questions:

“(1) is the dog a service animal required because of a disability, and (2) what work or task has the dog been trained to perform. Staff cannot ask about the person’s disability, require medical documentation, require a special identification card or training documentation for the dog, or ask that the dog demonstrate its ability to perform the work or task.”

“Comfort and emotional support” are not legitimate tasks as the ADA sees it, though dogs trained to assist owners with specific psychiatric conditions (like PTSD) are allowed.

If an animal is causing disturbances or threats to people, or isn’t house-trained, business owners may ask that the animal be removed from the premises (the owner of the animal may remain, however).

Different Rules for Housing Situations
Although ADA laws govern the use of service animals in public, a very different set of rules covers what must be allowed by landlords and providers of housing services.

What constitutes a legitimate service animal in housing situations is governed by the Fair Housing Administration and the Department of Housing and Urban Development.
Neither agency has an exacting definition of the term “service animal.”

According to the FHA, “species other than dogs, with or without training, and animals that provide emotional support have been recognized as necessary assistance animals” to persons seeking housing.

Such animals “must be necessary… to use or enjoy a dwelling or to participate in the housing service or program.”

Although HUD and the FHA are quite vague over what constitutes a service animal (Hawai`i-based property managers tell us that “comfort rabbits” are not uncommon), it does afford landlords specific protections when it comes to verifying a prospective tenants needs. 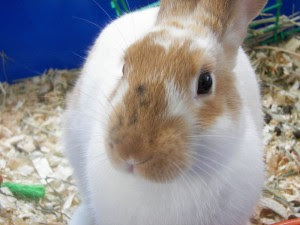 According to some Hawai`i property managers, “comfort rabbits” are not uncommon. Public domain image.
Unless a person’s disability and the need for a service animal is readily apparent, landlords may request that tenants furnish information verifying the disability-related need for the animal. This can take the form of a note from a medical professional, service agency, a support group, or a “knowing” third party.

The information furnished must verify that the person has “a physical or mental impairment that … limits one or more major life activities,” must describe the needed accommodation, and must show “the relationship between the person’s disability and … the requested accommodation.”

New State Law Could Fetch Fines for Violators
Recognizing the problems posed by an excess of fake service animals entering public spaces, the Hawai`i Legislature has taken up a measure aimed at cracking down on frauds.
House Bill 1420, which was introduced by Maui Rep. Angus McKelvey, passed by the House and is awaiting action in the Senate, would impose a fine of $1,000 for anyone falsely identifying a pet as a service dog.

Whether the bill is strictly meant to govern service animals in public spaces, or if it also encompasses housing situations appears to remain in question.

Also unclear is how exactly fake service pets would be sniffed out.
With federal laws forbidding business owners and law enforcement officials from demanding identification for service animals, and a lack of any official certification program, McKelvey’s measure may prove hard to enforce.

Nevertheless, the bill at least represents a conscious effort by the state to protect legitimate service dogs and their owners.

If nothing else, it may scare away a few phonies.

For all posts related on the 'Fake' Service Animal epidemic: CLICK HERE