A special needs student in a wheelchair was allegedly beaten by a school security guard in California -- and much of the incident was caught on video.
"He slapped me. He hit me so hard, it threw me out of my chair. I hit the floor with my chin first. I had a scar right here," Oakland High School student Francisco Martinez told KTVU, pointing to his chin.
The security guard was identified as 23-year-old Marchell Mitchell.
The school said Mitchell, who was a substitute school resource officer, was urging students to get to class on time on May 19. Martinez, 17, who has cerebral palsy and is in a wheelchair, "either refused to comply or was slow to do so," Principal Matin Abdel-Qawi wrote in a letter to parents cited by the San Francisco Chronicle.
Mitchell then began to push Martinez's wheelchair. When Martinez objected and tried to slap the guard's hands away, Mitchell allegedly handcuffed the teen to the chair.
Martinez admits he then spit on the guard.
"I was handcuffed, so I didn't have no way to defend myself but my mouth," Martinez told KTVU. 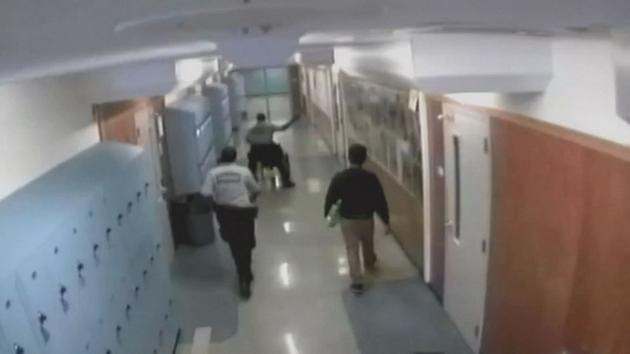 That's when the alleged assault on the student began, and Martinez says there's more to it than what's seen on the video. Along with being attacked in the hallway, Martinez said he was beaten and thrown to the ground in an elevator.
He's been battling pain since the incident.
Mitchell was fired, arrested by Oakland police and charged with corporal injury to a child, a felony.
"I'm shocked and deeply hurt by this behavior and apologize on behalf of the staff at Oakland High," Abdel-Qawi wrote. "This incident is not reflective of the kind of culture we cherish at our school or how we treat one another."
http://www.huffingtonpost.com/2014/05/30/student-in-wheelchair-beaten_n_5415867.html
Posted by Jim Watkins at 10:27 AM