STUDY: Could a Few Beers a Week Cut a Woman's Rheumatoid Arthritis Risk? 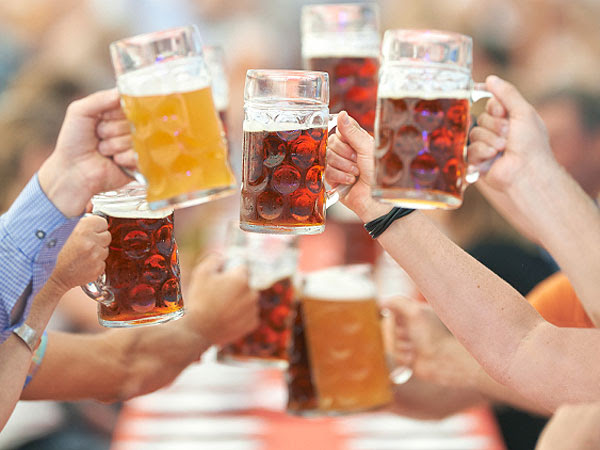 WEDNESDAY, May 7, 2014 (HealthDay News) -- Having a beer a few times a week might help women avoid painful rheumatoid arthritis, a new study suggests.

The disease, which affects women more than men, is a form of arthritis linked to immune system dysfunction. According to the Arthritis Foundation, over 1.5 million Americans suffer from the disease, which typically begins in the 20s or 30s.


However, "long-term, moderate alcohol drinking may reduce future rheumatoid arthritis development" in women, said lead researcher Dr. Bing Lu, an assistant professor of medicine at Brigham and Women's Hospital and Harvard Medical School, in Boston.
Overall, moderate use of any form of alcohol reduced the risk by about 21 percent, but moderate beer drinking -- two to four beers per week -- cut women's odds for the disease by nearly a third, the study found.
The findings are published in the spring 2014 issue of Arthritis & Rheumatism.
In their research, Lu's group tracked the drinking habits of women in two large studies, the Nurses' Health Study and the Nurses' Health Study II. The first study began in 1976, and includes more than 121,000 registered nurses. The second includes more than 116,00 nurses, and started in 1989. Women answered questions about their health and lifestyle every two years and about diet, including alcohol consumption, every four years.
Long-term moderate alcohol drinking appeared to reduce the risk of getting rheumatoid arthritis, Lu said. But drinking a few beers per week seemed to have the best effect, providing a 31 percent reduction in risk.
Lu said his team can't yet explain how beer and other alcohol might reduce a woman's risk for rheumatoid arthritis. He also doesn't know if the findings would apply to men. "We don't know for men," Lu said, "but rheumatoid arthritis is primarily a woman's disease."
The new study does echo some previous research, noted one expert, Dr. Len Horovitz, an internist at Lenox Hill Hospital in New York City.
"There is a correlation between alcohol and a reduced risk of rheumatoid arthritis over time," he said, citing other studies. However, that doesn't mean that one necessarily leads to the other -- "there is a correlation [shown here], not cause and effect," Horovitz said.
Exactly how a little alcohol may reduce a woman's odds for the joint malady is complicated, he said. "The mechanism of action is very complex," Horovitz said, involving immune system activity and other factors.
Dr. Daniel Arkfeld, an associate professor of clinical medicine at the Keck School of Medicine, University of Southern California, Los Angeles, called the findings "astonishing."
He also pointed to prior studies that have linked moderate alcohol intake with lower rheumatoid arthritis risk, but added that none had focused on beer specifically.
It's possible that alcohol may work to boost levels of estrogen, which is protective against rheumatoid arthritis, Arkfeld said.
The new findings might be especially relevant for someone with a family history of the disease, added Dr. Scott Zashin, a rheumatologist in Dallas and a member of the media committee for the American College of Rheumatology.
"The likelihood of someone developing rheumatoid arthritis is not common," Zashin said. "But if you have a family history, your risk increases."
He said that "patients with a family history might enjoy a beer a few times a week if there is no other reason not to drink."
But while imbibing the occasional drink may be good for your health, Horovitz stressed that excessive drinking is never a good idea. Nor is the new finding a reason for people who don't drink beer to start doing so, he said.
Arkfeld offered one more caveat, noting that alcohol does not mix well with certain rheumatoid arthritis drugs due to the risk of liver effects. So in those who already have rheumatoid arthritis, checking with your doctor before upping your alcohol intake is advised, he said.