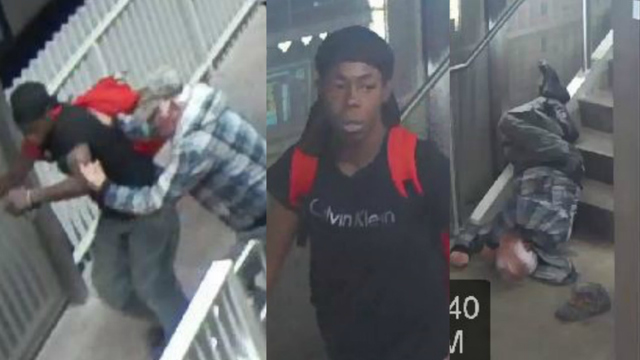 UPDATE FOLLOWS ORIGINAL POST- SUSPECT CHARGED!
SUN-TIMES MEDIA WIRE - Police are searching for a suspect (photo) who violently robbed an elderly man of his cellphone Monday night on a Brown Line platform in the Loop.
About 9:35 p.m., the 81-year-old was riding a Brown Line train as it approached the Washington/Wabash station at 29 N. Wabash Ave., according to an alert from Chicago Police. As the train’s doors opened at the station, the suspect ripped the man’s cellphone from his hands, and an ensuing struggle caused the man to tumble down a staircase on the platform.
The man suffered a laceration to his right temple, bleeding on the brain, abrasions, bruising and swelling to his hands and knees, police said. He was admitted to an intensive care unit for further observation.
The suspect is described as a black man, thought to be between 19 and 25 years old, standing between 5-foot-4 and 5-foot-7 with a dark brown complexion, police said. He was seen in surveillance footage wearing a black durag, a black Calvin Klein t-shirt, gray pants and a red backpack.
Anyone with information should call Area Central detectives at (312) 747-8384.
POSTED: OCT 18 2017 03:58PM CDT