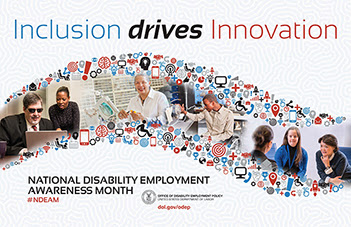 WASHINGTON, DC –  October 2017 - The U.S. Department of Labor is celebrating National Disability Employment Awareness Month throughout October. The Department’s Office of Disability Employment Policy (ODEP) previously announced the month-long theme is “Inclusion Drives Innovation.”
“This October, we celebrate the contributions and achievements of Americans with disabilities as part of the American workforce,” said U.S. Secretary of Labor Alexander Acosta. “As the Trump Administration drives job creation, we are reminded that the role of Americans with disabilities is not defined by what they cannot do, but rather, by what they can do. Each day, millions of Americans with disabilities go to work and know firsthand, the independence, pride, and sense of community that comes with a job. Their daily contributions are proof that inclusion helps drive American innovation.”
In 1945, Congress declared the first week of October as National Employ the Physically Handicapped Week. In 1962, the word “physically” was dropped to acknowledge individuals with all types of disabilities. In 1988, Congress expanded the week to a month and changed the name to NDEAM. In 2001, ODEP was established and formally began selecting the NDEAM theme.
Source: U.S. Department of Labor press release
U.S. Department of Labor Disability Awareness Resources: CLICK HERE
Posted by Jim Watkins at 4:42 PM

Email ThisBlogThis!Share to TwitterShare to FacebookShare to Pinterest
Labels: Employment