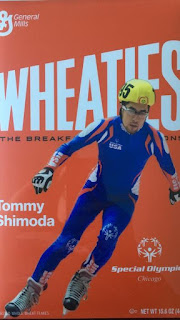 Mt. Greenwood native and Gold medal-winning speed skater Tommy Shimoda is a member of the Chicagoland Hall of Fame.

CHICAGO, IL -- Tommy Shimoda, the Mt. Greenwood speed skater who won a Gold medal in the Special Olympics earlier this year is part of a Chicagoland Sports Hall of Fame class that includes the likes of Tom Ricketts, Jonathan Toews, Kerry Wood and Hawk Harrelson. Shimoda became the first Special Olympics athlete ever to be inducted into this hall of fame during a Monday night ceremony at Wintrust Arena in Chicago.

Shimoda was also presented a keepsake, commemorative Wheaties Cereal box (photo) with his image, compliments of General Mills Corporation. General Mills included a personalized letter that read, in part: "Your gold and bronze speed skating medals in the Special Olympics World Games in Austria proves that you are a true champion. You beat the odds and pushed the limits. You challenged yourself, and strive to be your personal best."

Shimoda, who is (autistic) non-verbal and speaks with the aid of a handheld computer, has been a Special Olympics Chicago athlete at Mt. Greenwood Park since age 8. He plays more than 20 sports.

Article by Tim Moran for the Beverly Patch - Oct 3, 2017
https://patch.com/illinois/beverly-mtgreenwood/tommy-shimoda-inducted-chicagoland-sports-hall-fame
Posted by Jim Watkins at 8:01 AM