Dustin Jones must navigate an obstacle course every time he goes out. 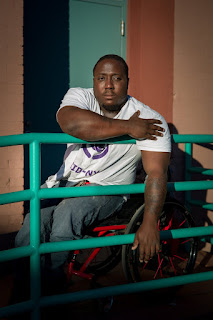 Mr. Jones (photo), who uses a wheelchair, gets stuck at sidewalk corners where the curb ramp is too broken to roll over or missing altogether. He has to keep going around the block until he finds a usable ramp. The one time he tried to roll off a curb without a ramp, he almost tipped over into the street. He never did that again.
SDustin Jones must navigate an obstacle course every time he goes out.
The report recommends that the city complete a comprehensive survey within 90 days, and develop detailed plans for installing curb ramps that meet federal standards at all corners without ramps within five years, and for upgrading existing ramps within eight years. It also recommends that the court appoint a monitor to oversee the city’s progress.

Sid Wolinsky, a senior supervising attorney for Disability Rights Advocates, said that while many cities have inaccessible curbs, the problem is particularly bad in New York. He said that limiting the ability of those in wheelchairs to get around can lead to social isolation and fewer opportunities for jobs, education and civic participation. “New York City has a hostile environment for people with disabilities,” he said.

Disability Rights Advocates, representing a coalition of disability rights groups, has also challenged the accessibility of the city’s subway system in two discrimination lawsuits against the Metropolitan Transportation Authority over the scarcity of elevators and their frequent breakdowns. It has filed a lawsuit against Uber for providing scant access to wheelchair-accessible vehicles.

Polly Trottenberg, New York’s transportation commissioner, said that the city was committed to making every curb accessible and has made that a priority in its larger Vision Zero campaign to reduce pedestrian fatalities. But she added that it is a vast undertaking with 162,000 corners and more than 300,000 pedestrian ramps, and that the time frames recommended in the court-ordered report are unrealistic.

“We are doing everything we can to improve our efforts on the pedestrian ramps,” Ms. Trottenberg said. “We disagree on the timeline, but we agree on the goal of full accessibility of the sidewalks.”

Of the city’s 162,000 curb corners, only about 2,246 have no ramps, according to city officials. Most of them have complicating factors, such as catch basins, light poles, subway infrastructure or proximity to a historical property, which require extensive design and construction work that could take years to complete. For instance, the transportation department recently devised a temporary measure — an asphalt ramp — for a curb next to a subway entrance beside City Hall in Lower Manhattan until a permanent solution can be built.

In addition, about 116,000 of the corners with existing ramps require some work, ranging from minor repairs to a complete reconstruction, according to city officials.

Ms. Trottenberg said her department had already taken steps to improve its curb ramp program, including increasing funding by hundreds of millions of dollars and hiring dozens of workers. Later this year, the city plans to begin surveying every corner using the latest digital technology to create a comprehensive inventory that will be made publicly available on a website.

Susan Dooha, the executive director of the Center for Independence of the Disabled New York, said that while inaccessible curbs are a headache for many pedestrians — including parents with strollers and tourists with suitcases — they are particularly dangerous for those with disabilities. She said that some curb ramps have crumbled or are too narrow, while others have such a steep incline that they could send a wheelchair flying into the street. Other curbs lack any markers for the visually impaired to warn them that they are entering the street.

“Every single day, every move you make across New York City is limited by the city’s failure to take disability rights seriously,” Ms. Dooha said.

Monica Bartley, 62, a community outreach organizer for the independence center who uses a wheelchair, said that she had been late for appointments because she was unable to cross a curb and needed to retrace her path to find another place to cross. Other times, her wheelchair has been damaged by ramps that are uneven or have sharp edges.

“It’s frustrating because it creates problems,” she said. “Other people are able to go about their business without encountering any barriers.”

A version of this article appears in print on October 9, 2017, on Page A17 of the New York edition with the headline: Disabled New Yorkers Face Trouble With the Curbs.
https://www.nytimes.com/2017/10/08/nyregion/new-york-city-sidewalks-disabled-curb-ramps.html
Posted by Jim Watkins at 7:15 PM

Email ThisBlogThis!Share to TwitterShare to FacebookShare to Pinterest
Labels: centers for independent living