Boy with Special Needs Reaction to Bullying will melt your heart.

one of those articles just have to share, Enjoy!


All the students at Franklin Elementary in Mankato, Minn. start every day with the Pledge of Allegiance.


But the "justice for all" part belongs to five fifth-grade boys.

"Why pick on someone," Jack Pemble begins to ask, as Jake Burgess finishes his question, "who has special needs?"
They're talking about James Willmert, a fifth-grader from another classroom, with a learning disability. Which, it turns out, can get a guy teased.
Jack and Jake had seen it happening on the playground while hanging out with their friends Gus Gartzke, Tyler Jones and Landon Kopischke.
"They were like, using him and taking advantage of him," Jake explains. "Because he's easier to pick on, and it's just not right," Jack adds.
Which is why Gus, Tyler, Landon, Jake and Jack decided this year they would have James' back. 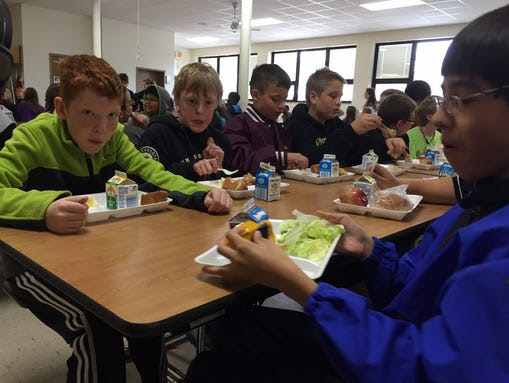 James used to linger at lunch, not wanting to go out and play. Now he sits with his friends and is the first out the door. (Photo: Boyd Huppert, KARE)
At lunch, the five boys invite James to their table.
"It really kind of makes you proud to be their teacher," says Mallory Howk, who has spent the year with the five attentive boys in her fifth-grade class.
Howk believes the school's anti-bullying lessons must have struck a chord with the boys, but their kindness has gone beyond even her expectations.
James' mom's too.
"He used to not want to go out for recess or anything, it would be like a struggle," says Margi Willmert, James' mom. "And now he can barely eat his lunch to get outside to play with those guys."
The more the boys play with James, the more they learn about him.

Watch the video to see the special gift James' friends got him.
The USA TODAY network, not only do we want to provide you with the current events of the day, but also a little dose of inspiration while you're getting your news fix. Inspiration Nation is our way of providing you with that jolt of good news to bring a smile to your day.
http://www.usatoday.com/story/news/2015/06/01/inspiration-nation-bullying/28303975/
Posted by Jim Watkins at 11:27 AM