Commemorating 50 Years of Medicare and Medicaid On July 30th, 2015

On July 30th, 2015 the nation will mark the 50th anniversary of the law creating Medicare and Medicaid.  Beginning today, and leading up to the anniversary, the Center on Medicaid and CHIP Services will be recognizing Medicaid’s contribution to the health and security of the most vulnerable Americans.  Each day for the next 50 days, we will be posting on Medicaid.gov, highlights of the program’s history and progress.  We’ll feature policies that have advanced health coverage and care, share profiles of key people who helped shape the program, and elevate Medicaid’s accomplishments and path forward.  We hope these posts, set to culminate on July 30th,  will help deepen our collective understanding of Medicaid’s importance to health care in the United States.  We also hope that you will find the posts a useful addition to your own Medicaid 50th Anniversary celebrations.
Distributed by Center for Medicaid and CHIP Services (CMCS)
--- 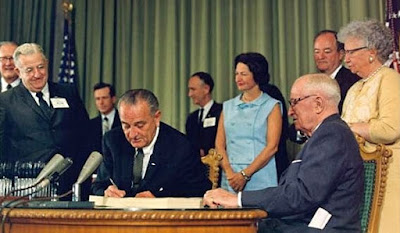 President Lyndon B. Johnson went to the Truman Library in Independence, Missouri to have the former president, Harry Truman, join him for the signing of the bill establishing Medicare, or as the record shows then, the “Supplementary Medical Insurance Program Under the Social Security Act.” The information and downloads below report or from Social Security and Medicare.
The Medicare and Medicaid programs were signed into law on July 30, 1965. President LBJ is pictured at the signing ceremony in Independence, Missouri at the Truman Library. Former President Truman is seated beside him. LBJ held the ceremony there to honor President Truman's leadership on health insurance, which he first proposed in 1945.
At the bill-signing ceremony President Johnson enrolled President Truman as the first Medicare beneficiary and presented him with the first Medicare card. Below a photograph of President Truman's application for the optional Part B medical care coverage, which President Johnson signed as a witness. SSA History Archives. 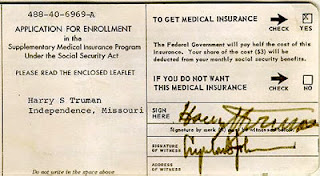