Disability rights advocates braved the rain Wednesday afternoon to deliver a coffin to Gov. Bruce Rauner's Chicago office in protest of, what they say are, "deadly" budget cuts outlined in the Republican's 2016 budget proposal. 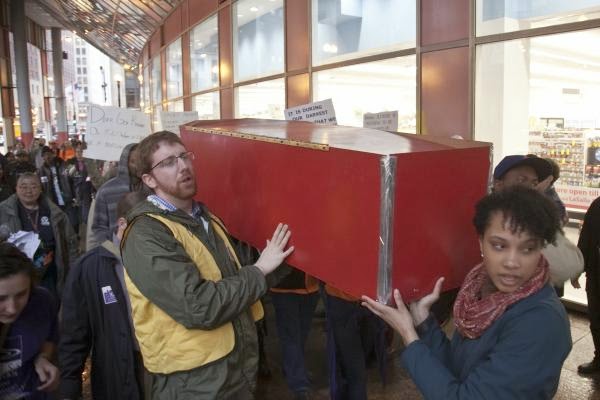 "In order to have a life beyond my apartment, I need help," said Michael Herzovi, who has a physical disability and uses a power wheelchair.

Herzovi was one of more than 100 protesters to participate in the rally outside the Thompson Center. In addition to the coffin, which was marched inside by a handful of delegates, were testimonials from people who would be directly impacted by proposed cut to programs subsidized under the state Department of Human Services (DHS).

Faced with a $6 billion budget deficit next fiscal year, which begins July 1, Rauner's budget proposal calls for reducing DHS spending by more than $500 million. One of the DHS programs on the chopping block is the Illinois Home Services program, which connects physically disabled people younger than 60 to personal assistants who can come to their homes.

By changing the eligibility criteria for the Home Services program, Rauner's plan slashes $110 million from that support system.

"Because of this help I'm able to be part of society, to live the life that I decide is best for me; to volunteer; to give back to the community; to work as much as I can; and to pay taxes," he said. "The Home Services program helps people live productive, vibrant lives. We need to keep these services funded and growing."

Under the proposed cuts to the Home Services program, the minimum eligibility or "Determination of Need" score would be raised from 29 to 37. Access Living, the Chicago-based disability rights group that organized Wednesday's protest, estimates that 10,000 Illinoisans, representing one-third of the entire Home Services program, could lose access to home-based assistance if the score is raised.

"Determination of Need" score is 33, meaning he would fall below the eligibility threshold if the program's proposed eligibility changes are realized.

Protesters on Wednesday advocated for the passage of HR 344, which opposes changing the "Determination of Need" score. The legislation says raising the minimum threshold "would result in thousands of people with disabilities and seniors being left without critical support for activities of daily living in their own homes." Introduced April 6 by State Rep. Robyn Gabel (D-Evanston), the resolution as been co-sponsored by State Rep. Lou Lang (D-Skokie).

Karen Boyd, 50, who also uses a power wheelchair but didn't know her "Determination of Need" score, lives with her brother and 9-year-old daughter in the Hyde Park neighborhood on the city's South Side. She is worried that, if passed, Rauner's proposed budget would result in her having to move into a nursing home. If that happens, her daughter would have no other option but to move in with a family member.

"I want to raise her, I'm her mother, that's my job," said Boyd, adding that her brother works as her personal care assistant for six hours each day.

According to Access Living, each person that receives assistance from the Home Services program saves the Illinois Medicaid system an average of $17,000 because they live at home instead of a nursing home.

"They're not looking at the numbers closely enough to understand that these cuts are going to cost money," said Gary Arnold, spokesman for Access Living. "The way to save money is to invest in the serves and the programs that allow people to live in the community, so they're not forced to go into institutions, emergency rooms and things like that."

"They're not looking at the numbers closely enough to understand that these cuts are going to cost money," said Gary Arnold, spokesman for Access Living. "The way to save money is to invest in the serves and the programs that allow people to live in the community, so they're not forced to go into institutions, emergency rooms and things like that."

Arnold added that the cutbacks in Rauner's proposed budget are "an affront and a threat to the rights of people with disabilities" under the Americans With Disabilities Act (ADA).

"The Americans With Disabilities Act says that people have the right to services in the most integrated settings... It's a form of discrimination to unnecessarily institutionalize people and here we have the state of Illinois cutting off services that support people in integrated settings," Arnold said.

Other support systems on the chopping block in Rauner's proposed budget include transportation, mental health, immigrant integration, addiction prevention and, among others, consumer support programs.