as posted by ADA25 Chicago 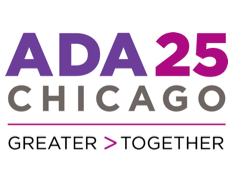 Regional initiative will commemorate 25th anniversary of Americans with Disabilities Act by challenging leaders and organizations to improve access, equality and opportunity

Email ThisBlogThis!Share to TwitterShare to FacebookShare to Pinterest
Labels: Chicago