The U.S. Department of Transportation (DOT) on March 13 issued a final rule outlining responsibilities public transit providers have in making accommodations and reasonable modifications to polices, practices, and procedures to ensure accessibility for people with disabilities. The new rule provides greater detail on existing obligations for transportation entities receiving federal financial assistance under Section 504 of the Rehabilitation Act. It also supplements regulations issued under the ADA which covers access to public transportation without regard to federal funding.

The regulations do not set new requirements as much as recognize existing practices for achieving access to transit systems, including examples of reasonable modifications . According to Acting Federal Transit Administrator Therese McMillan, the rule "simply codifies and clarifies what many in the transit community are already doing to accommodate their riders who have disabilities. We are making sure that reasonable modifications are part of transit provider policies and more uniformly applied while keeping decision-making in their hands."

The best links for information on the Final Rule are:
### 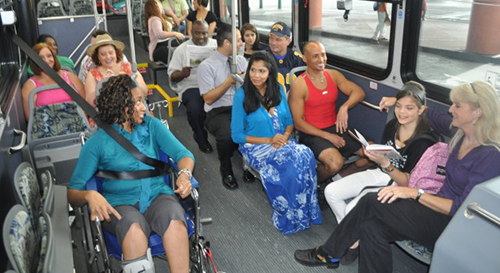 WASHINGTON – The U.S. Department of Transportation announced today the publication of a Final Rule clarifying that public transportation providers are required to make reasonable modifications to their polices, practices and procedures to avoid discrimination and ensure programs and services are accessible to individuals with disabilities.
“Ensuring equal access to public transportation enables individuals with disabilities to have access to jobs, school, medical care and a better quality of life,” said U.S. Transportation Secretary Anthony Foxx. “Making reasonable modifications to transit services helps bring everyone on the path to access the ladders of opportunities that all Americans strive for.”
The Final Rule applies to public entities providing fixed route, dial-a-ride and complementary paratransit services. It establishes that an individual’s disability cannot preclude a public transportation entity from providing full access to its service except where doing so would fundamentally alter the service. It also provides 27 examples of what a reasonable modification is and is not, and clarifies the definition of origin-to-destination service.
“Today’s rule simply codifies and clarifies what many in the transit community are already doing to accommodate their riders who have disabilities,” said Acting Federal Transit Administrator Therese McMillan. “We are making sure that reasonable modifications are part of transit provider policies and more uniformly applied while keeping decision-making in their hands.”
Further, the Final Rule brings clarity to the issue of origin-to-destination policy which has had varied interpretations and was unevenly applied throughout the nation. The new rule requires paratransit providers that primarily operate curb-to-curb service to make reasonable modifications for those passengers who need assistance beyond the curb so that they can use the service. A significant number of paratransit operators already follow such an origin-to-destination policy.
Public transportation entities receiving federal financial assistance have long had the obligation to provide reasonable modifications under various laws and regulations. This Final Rule revises and fills identified gaps in the DOT’s regulations. It becomes effective on July 13, 2015.
http://www.fta.dot.gov/newsroom/news_releases/12286_16374.html
###
Posted by Jim Watkins at 7:31 PM