Just as 55 million Social Security recipients are about to get their first benefit increase in three years, Congress is looking at reducing future raises : Nov 7, 2011 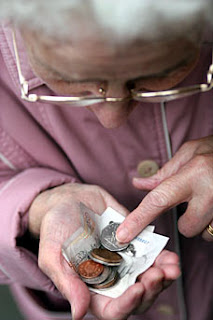 WASHINGTON (AP)-- Just as 55 million Social Security recipients are about to get their first benefit increase in three years, Congress is looking at reducing future raises by adopting a new measure of inflation that also would increase taxes for most families — the biggest impact falling on those with low incomes.

If adopted across the government, the inflation measure would have widespread ramifications. Future increases in veterans' benefits and pensions for federal workers and military personnel would be smaller. And over time, fewer people would qualify for Medicaid, Head Start, food stamps, school lunch programs and home heating assistance than under the current measure.

Taxes would go up by $60 billion over the next decade because annual adjustments to the tax brackets would be smaller, resulting in more people jumping into higher tax brackets because their wages rose faster than the new inflation measure. Annual increases in the standard deduction and personal exemptions would become smaller.

Despite fierce opposition from seniors groups, the proposal is gaining momentum in part because it would let policymakers gradually cut benefits and increase taxes in a way that might not be readily apparent to most Americans. Changes at first would be small — the Social Security increase would be cut by just a few dollars in the first year.

But the impact, as well as savings to the government, would grow over time, generating about $200 billion in the first decade and much more after that.

The proposal to adopt a new Consumer Price Index was floated by the Obama administration during deficit reduction talks in the summer. Now, it is one of the few options supported by both Democratic and Republican members of a joint supercommittee in Congress working to reduce government borrowing.

The committee of six Democrats and six Republicans is struggling to come up with a plan to reduce government red ink by at least $1.2 trillion over the next decade. Changing the inflation index alone would put them a sixth of the way there.

"I think the thought process behind this is, slip this in, people won't understand it," said Max Richtman, president and CEO of the National Committee to Preserve Social Security and Medicare.

Richtman's group is spending about $2 million on radio, TV and direct mail ads to fight cuts in Social Security and Medicare. His message to Congress: "Don't believe that taking this approach to cutting Social Security will not be noticed. You will pay for it."

A TV ad by AARP puts it this way: "We are 50 million seniors who earned our benefits, and you will be hearing from us today — and on Election Day."

The inflation measure under consideration is called the Chained Consumer Price Index, or chained CPI. On average, the measure shows a lower level of inflation than the more widely used CPI for All Urban Consumers.

Many economists argue that the chained CPI is more accurate because it assumes that as prices increase, consumers switch to lower cost alternatives, reducing the amount of inflation they experience.

A report by the Moment of Truth Project, a group formed to promote the deficit reduction package produced by President Barack Obama's deficit commission late last year, supports a new inflation measure. "Rather than serving to raise taxes and cut benefits, switching to the chained CPI would simply be fulfilling the mission of properly adjusting for cost of living," it argues.

The new measure would reduce Social Security cost-of-living adjustments, or COLAs, by an average of 0.3 percentage points each year, according to the Social Security Administration. Next year's increase, the first since 2009, will be 3.6 percent, starting in January.

"For someone in the first year, it may not seem a lot," said AARP's David Certner. "But as people get older and then they get poorer and more reliant on Social Security, the cut gradually gets larger and larger."

In all, adopting the chained CPI would reduce Social Security benefits by $112 billion over the next decade. Federal civilian and military pensions would be $24 billion lower, according to the nonpartisan Congressional Budget Office.

If adopted across the government, fewer people would be eligible for many anti-poverty programs because the poverty level also would increase at a lower rate each year. That would result in fewer people living below the official poverty line, despite having the same income.

For example, by 2021, taxpayers making between $10,000 and $20,000 would see a 14.5 percent increase in their federal taxes with a chained CPI, according to an analysis by the Joint Committee on Taxation. Taxpayers making more than $1 million would get a tax increase of 0.1 percent.

Despite the political backlash, some lawmakers see the new inflation measure as a way to help break the deadlock in Washington over tax increases and cuts in benefit programs. Most Republicans adamantly oppose tax increases, while Democrats have said they won't support benefit cuts without a substantial increase in revenue.

Rep. Xavier Becerra, a California Democrat who serves on the supercommittee, helped lead the fight over the summer against adopting the chained CPI. But in an interview last week, he wouldn't rule out supporting a package that included it.

"If you're going to simply try to save money by changing the CPI, you can do that," Becerra said. "But then be up front and tell seniors what you're doing. You're throwing them under the bus to save money."