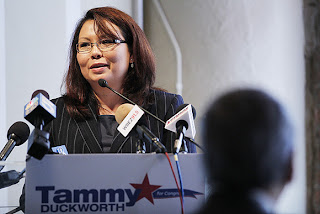 Duckworth is a former U.S. Veterans Affairs official in the Obama administration. She was an Army helicopter pilot in the Iraq War when she lost her legs in combat in 2004.

The Democrat from Hoffman Estates is seeking office in the newly drawn 8th District in Chicago's northwest suburbs.

She ran unsuccessfully for Congress in 2006 in another district. Parts of that old district are included in the new 8th District.
Posted by Jim Watkins at 1:25 PM