McFadden continues to roll in wins 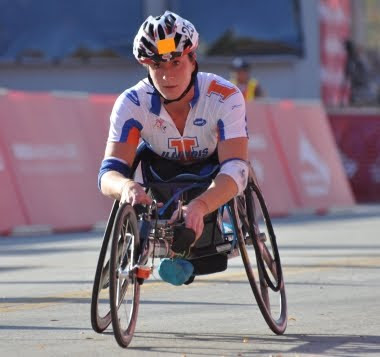 Tatyana McFadden doesn’t have a first-place medal from the New York City Marathon.

It’s not because the Illinois junior has never won it, or because she lost it, or because she had to return it. Rather, she decided to give the medal — won in last year’s wheelchair division — away to the crowded orphanage in St. Petersburg, Russia, where she spent the first six years of her life.

“I wanted to give something back to the people who took care of me when I was helpless,” McFadden said.

“I knew there would be chances to win another,” she added.

But at the Nov. 6 New York City Marathon, McFadden wanted a medal for keeps.

McFadden has the perfect build for a wheelchair athlete — broad shoulders, long arms and a lot of natural strength. Those qualities, along with a strong work ethic, propelled the 22-year-old to where she is today — a two-time winner of the Chicago Marathon (2009, 2011), winner of the New York City Marathon (2010) and owner of six Paralympic medals.

“I’m successful because I’ve never let my disability stop me,” McFadden said. “I’ve never thought of myself as disabled.”

McFadden was born with spina bifida, and her birth parents were unable to take care of her. After surgery, she was sent to a crowded orphanage, living for six years in its two small rooms. The orphanage couldn’t afford a wheelchair, so McFadden was forced to walk on her hands, dragging her legs behind her. McFadden was adopted and taken to the United States, where her new family immediately introduced her to sports. She tried swimming and basketball before falling in love with track.

“I loved the need for speed, and I just loved the competition,” McFadden said. “I remember it was eighth grade year and that time for the Olympics to come up in 2004. I was saying, ‘I’m going to be a Paralympian someday, I’m going to be one of the athletes who represent the United States.’”

On Oct. 9, McFadden won her second career Chicago Marathon. This win was special because it qualified her for the 2012 Paralympics in the event. The marathon is the one event she has yet to compete in at the Paralympics. In 2004 and 2008, she competed in the 100-, 200-, 400- and 800-meter competitions. With the addition of the marathon, she hopes to win five medals in London 2012.

“It should be really tough because there’s great competitors there,” McFadden said. “But once you get there, all the difficulties and health problems you have don’t even matter because you’ve arrived, you’ve made it. Just to be there representing your sport and your competition, it brings liveliness to your sport.”

The Chicago Marathon was unfavorable to McFadden because it was flat, and she’s a talented hill climber. The hills in New York proved challenging, though.

“In a flat race, in wheelchair racing, everyone can stay together,” McFadden said. “That makes it hard to break away from the pack, because they can make up that time easily.”

In the marathons, McFadden raced with former Illini and current U.S. teammate Amanda McGrory, who had to end the Chicago race early because of an equipment failure. The two often train together because of their similar styles.

“Tatyana is one of my favorite people to push with because she always works hard,” McGrory said. “She doesn’t play any silly games, she doesn’t fake that she is tired or anything like that.”

Now that McFadden has qualified for the Paralympics, she hopes to balance her sprint training with distance.

McFadden and McGrory both train at Illinois, where everyone calls McFadden “Beast” because of her strength and power. Illinois wheelchair track and field head coach Adam Bleakney coined the term, maybe because of a situation he witnessed during McFadden’s early days at Illinois.

“There was an arm-wrestling contest, and it was just guys up there arm wrestling,” Bleakney said. “You could see the effort level start to rise, and she beat the guy in the arm-wrestling contest. It’s a great story, and I always give her a hard time for it. Our Ms. Tatyana McFadden, beating the boys.”

Bleakney said McFadden’s discipline, along with her natural body makeup, makes her unstoppable. He has no doubt McFadden can be a top finisher in any race she competes in.

“I truly believe that when she wins, which is frequently, it’s because she really does deserve it, because she truly is the strongest and best-trained athlete in the race,” McGrory said.

When she’s not busy training, McFadden is pursuing a degree in human development and family studies at Illinois, something she said is almost as important to her as competing.

“I want to graduate from college with a degree because an education can never be taken away from you, but sports can because of an injury or something else,” McFadden said.

Sometimes, the repetitive nature of classes in the morning, training in the afternoon and homework at night can be exhausting.

“I don’t see her as much as I’d like to outside of training because she’s always busy with schoolwork,” McGrory said.

“I want to work with children and hopefully change their future for the best,” McFadden said.

Her past always influences her in her life decisions and efforts to make a difference. McFadden was not treated as a regular member of the track team at Atholton High School in Columbia, Md. She didn’t have a uniform, and the meets took a pause while she competed in her events, alone.

McFadden sued the state of Maryland for equal access to school athletics for people with disabilities. The lawsuit took four years and resulted in the Fitness and Athletics Equity for Students with Disabilities Act being passed in April 2008.

“I knew it was important to make a difference for myself and others,” McFadden said. “I hope there’s equal access in school sports for people with disabilities in all 50 states one day.”

McFadden places an importance on being active and plans to move on to some type of other physical activity when she grows older, like tennis or cross-country skiing.

Until then, she hopes to compete on the track for as long as possible, happy she has yet to hit her peak. McFadden thinks she can race until at least her 40s.

“As she ages and matures, she’ll make some jumps,” Bleakney said. “Whatever her goals are — whether it’s to hold world records in five events at one time or do some other very ambitious goal — there’s no doubt in my mind she can accomplish it.”

In the meantime, knowledge of McFadden is spreading throughout the country. There is a cutout of McFadden in her wheelchair on 150 million McDonald’s cups across the country with the words: “For the spirit of competition, because others said I never would, I see my disability as an ability, that’s what I’m made of.”

She was also selected as one of nine representatives for Team USA from BP. Her picture hangs in BP gas stations nationwide and is even on the gas pumps.

“I hope people can learn something from me,” McFadden said. “I want everybody to accomplish something great.”

On Nov. 6, McFadden pushed to do something for herself and win her personal first-place medal at the New York City Marathon. However, she ended up behind the front pack and was never able to take the lead, finishing third. McGrory ended up winning this one. McFadden was disappointed, but she knows there will be more.

“Next year’s race will be pretty soon after the Paralympics, but I’ll probably race in it again,” McFadden said.

She needs that second medal, and this one she won’t give away.

Illinois, a leader in wheelchair athletics

Wheelchair athletics has a strong reputation at Illinois. Many athletes participate on the University team and then stay in Champaign after graduation to continue training for the upcoming Paralympics in London 2012.

One of those athletes is Amanda McGrory, 25, who graduated in 2010 and won the wheelchair division of the New York City Marathon on Sunday. McGrory set the course record with a time of 1 hour, 50 minutes, 24 seconds.

“There’s no better place in the world to be for training than this,” McGrory said. “The team’s pretty strong, the coaching is phenomenal and the support for everything is just unbelievable.”

Seventeen student athletes compete on the men’s and women’s wheelchair track and road racing teams. They race on every distance on the track, from 100 to 10,000 meters, to half-marathons and full-marathons.

Some athletes specialize, and others do it all, said head wheelchair track and field and road racing coach Adam Bleakney, a competitive racer himself.

Bleakney, along with junior Tatyana McFadden and Josh George, who train at Illinois, all qualified for the 2012 Paralympics in the marathon during the Chicago Marathon on Oct. 16.

Racers will be able to qualify for the sprint events during the qualifiers in July, when the official U.S. team is named.

“My hope is that I’ll have up to eight or nine athletes who make the U.S. Paralympic team,” Bleakney said.
Posted by Jim Watkins at 6:37 AM