Chicago--Iraq and Afghanistan war veteran Tony Simone sat on a paralympics-style stationary hand cycle, his eyes, fixated on a screen inside Willis Tower that showed him closing in on his goal of cycling 3.5 miles with one hand. 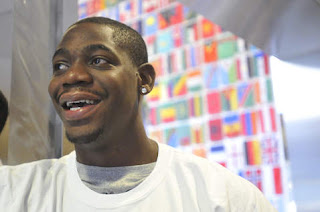 
Nearby, hundreds were preparing to take the stairs up 103 floors to the top of the Willis Tower.

A spokeswoman couldn’t immediately say how much money the event raised. As of Nov. 3, the event had raised about $900,000, but donations are being accepted through the end of the month. Last year, the event raised more than $1 million.

The fundraiser Sunday attracted roughly 2,500 participants, including past and present stair-climbing patients, community supporters and nearly 40 hand cyclists like Simone. 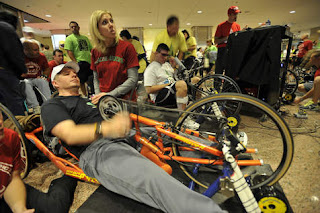 {photo: Tony Simone, a war vet. with his wife Andrea Simone at his side encourging him, does the hand cycle equivalent of climbing 103 stories in SkyRise Chicago, the tallest indoor stair climb benefiting the Rehababilitation Institute of Chicago. November 6, 2011 | Brian Jackson~Chicago Sun-Times}

The 30-year-old Joliet resident was severely injured when the helicopter he was co-piloting in Afghanistan was shot down three days before he was scheduled to return home. The crash caused a traumatic brain injury that left him with a speech impairment, requires him to walk with a cane and that restricts mobility of his left arm.

Simone, who was released from inpatient rehabilitation at RIC a few months ago, is now an outpatient. He said he hopes his involvement in the event helps raise awareness about RIC.

“I hope a lot of people will hear about it and donate money,” he said as he joined others who participated in the fundraiser at the top of Willis Tower. There they were greeted by cheers and given medals.

“The therapists have been the best,” Simone added.

Asked how he felt upon completing his cycling mission, “relieved,” he said with a smile. He added he was disappointed that he came in last instead of first among his group of hand cyclists.

But you did it with one arm,” his proud wife, Andrea Simone told him. She held his left hand as he cycled and planted a kiss on him, when he finished.

Among participants in the stair climb were pregnant women, climbers walking with prosthetic legs; children and seniors ages nine to 80; and Chicago Bulls player Ronnie Brewer, who did the stair climb for the first time. After finishing, Brewer said the climb wasn’t equivalent to using a stairmaster or performing sprints or line drills, which he’s used to doing.

“It was tougher than I thought,” he said, noting he drew inspiration “from signs and people cheering you on. You see patients going up their walking. You had some firefighters with all their equipment on, and you’re like man, you can’t really take a rest. You’ve got to push through it because those people are pushing through it.”

He said he hoped his participation served as an inspiration to patients and that it would inspire other athletes to become involved in more charitable community events, adding, “When you have the opportunity to be able to help the community, I feel like it’s your duty and you owe it to yourself, to your city, your family to go up there and do your part.” 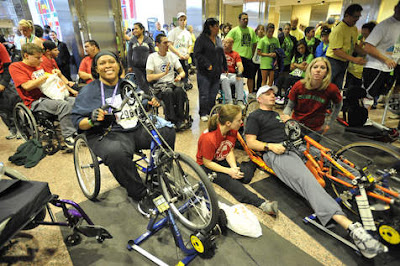 Fireman Steve Coover of Bloomington, Ind. joined Chicago resident Kathy Pacholski taking flight up the stairs. They met for the first time on about the 30th floor and stayed together for the rest of the climb.

“I was supposed to be carrying him the last three flights, but he’s too heavy for me,” Pacholski kidded.

Pacholski, 50, suffered a stroke 15 months ago that left her unable to walk or move her right side. Sunday it took her about an hour and 15 minutes to complete the climb.

After her stroke, “It took two people to get me out of a wheelchair in the beginning,” she shared. “And now look at me. It’s just amazing.”

She said she participated in the event to give back to RIC. Help she received at RIC included one-on-one therapy in combination with state-of-the art robotic devices to improve her arm and hand function. She also received therapy via the so-called Lokomat, a robotic exoseleton over a treadmill that aids in walking, and she participated in a study using Trans-radial Magnetic Stimulation that helps her focus on the specific area of the brain where her stroke occurred.

Tyree Beard of Hillside, was among seven co-workers from Celtic Insurance who participated in the climb — a first for him. Asked how he prepared, the 31-year-old conceded, “I didn’t, prepare honestly. This morning I ate a healthy breakfast, and I just made up my mind I was going to complete it. I took plenty of breaks.” 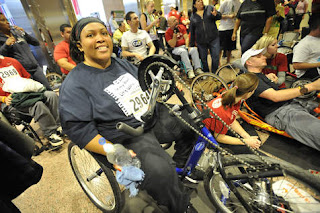 {photo: Victoria Nunn as she finishes}

Hand cyclist Victoria Nunn, who is receiving therapy at RIC for a neurological disorder she suffered seven years ago that left her unable to walk, said she trained twice a week for two months for the event. She’d just completed the 3.5-mile trek Sunday and wore a broad, proud smile. Her hand cycle and the others were calibrated to mimic the same elevation and distance of the stair climb.

“It’s amazing to be able to accomplish this,” she said. “I feel great.”

Thanks to improvement in her condition, Nunn is hopeful she’ll be able to do the stair climb next year.

This year, garbed for inspiration in a T-shirt that belonged to her father, who recently passed away, she completed her hand cycle trek in 37 minutes, a personal best.