A Department of Education website explaining the rights of students under the federal Individuals with Disabilities Education Act has vanished. That’s the same law that confounded new Education Secretary Betsy DeVos during her confirmation hearings 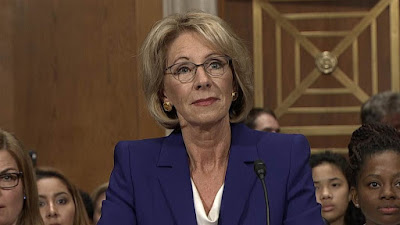 article by Mary Papenfuss for The Huffington Post | Feb 13, 2017

DeVos dodged questioning about the law last month, insisting it was up to individual states on whether to grant disabled students their educational rights, even though it’s a federal law that applies across the nation.

New U.S. Attorney General Jeff Sessions has also blasted the act for its “special treatment of certain children,” blaming it for the “acceleration in the decline of civility and discipline in classrooms across America.”

The Department of Education site now attributes the broken link to “technical difficulties” and instead sends people to the 159-page text of the very technical, complicated statute. The department site also lists available special education programs.

The disabilities act information site that has now vanished was established under George W. Bush’s administration as an aide for parents, students, teachers and school administrations to help them understand the rights of disabled students to an appropriate free public education under the law. The site was updated as modifications were passed and courts continued to interpret the law.

Washington Democratic Sens. Maria Cantwell and Patty Murray, who both voted against DeVos’ confirmation, issued a statement Friday demanding to know why the information had been scrubbed.

“The Department’s failure to keep this critical resource operational makes it harder for parents, educators, and administrators to find the resources they need to implement this federal law and protect the rights of children with disabilities,” they said.

The Washington senators demanded a “detailed timeline” of when the information was taken down and when it will be restored.

They also criticized President Donald Trump for being someone who is not an “advocate for disability rights [and who] famously mocked the physical disability of a New York Times reporter who asked him a question at a news conference” during his presidential campaign.

During DeVos’ confirmation hearings last month, Sen. Tim Kaine (D-Va.) quizzed the nominee on the law. DeVos responded that it was a “matter best left to the states.” Kaine then asked: “So some states might be good to kids with disabilities and other states might not be so good and, what then, people can just move around the country if they don’t like how kids are being treated?” DeVos again repeated that it’s an issue “best left to the states,” seemingly unaware of how federal law works.

Sen. Maggie Hassan (D-N.H.), who has a son with special needs, clarified that the act is a federal civil rights law, adding: “So do you stand by your statement a few minutes ago that it should be up to the state whether to follow it?”

DeVos responded: “I may have confused it.”

Sessions spoke out against the law in 2000 from the Senate floor when he was representing Alabama.

“We have created a complex system of federal regulations and laws that have created lawsuit after lawsuit, special treatment for certain children, and that are a big factor in accelerating the decline in civility and discipline in classrooms all over America. I say that very sincerely,” Sessions said.

DeVos, a billionaire Republican donor, was confirmed last Tuesday on a 50-50 Senate vote that required a tie-breaking vote from Vice President Mike Pence. She has no formal experience working in public schools and has spent years supporting school vouchers and charter schools. During her first visit as education secretary to a public school in Washington, D.C., last week, protesters blocked her from entering through the main doors.

There has been no response to the website changes from DeVos.

http://www.huffingtonpost.com/entry/devos-disabilities-web-site_us_58a0fd7ae4b094a129ec35b8
Posted by Jim Watkins at 9:59 AM