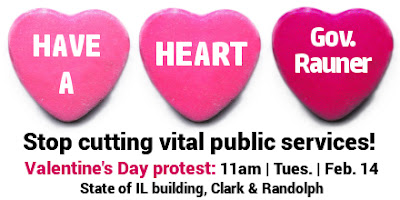 On eve of Rauner’s budget address, and the vote on controversial overtime rule, people with disabilities, home caregivers and union members to call on governor to end policies that threaten thousands of Illinois residents and the workers on whom they rely.

CHICAGO—February 9, 2017.  Thousands of people with disabilities in Illinois live vibrant independent lives as workers, students, parents and participants in their communities — because they have the support and assistance of caregivers. But those workers and the clients they serve are now threatened by heartless new work rules being pushed by Illinois’ governor as part of a broad campaign to undercut labor rights — including for these low-wage workers. Caregivers are fighting back with the clients whose independence is grounded in their work — and they’re joining union workers, public employees and allies to send that message to Rauner on the eve of his annual budget address.
This Valentine’s Day, they’ll gather to deliver valentines to Rauner with one clear message: Have a heart, Governor, and safeguard the rights of caregivers, public workers, union members and the Illinois residents who rely on their services. Participants will gather at 11 a.m. on Valentine’s Day, February 14, at the Thompson Center — the local administrative seat for the State of Illinois — in the public square outside the main doors at Clark and Randolph, for a press conference and picket before delivering their valentines to the governor’s office.
Among the issues participants are challenging are Rauner’s proposed new overtime rules for PAs or personal assistants, caregivers who make it possible for people with disabilities to live independently instead of inside institutions like nursing homes — and who could be fired for working overtime for their disabled clients. Speakers will talk about the dire consequences of Rauner’s heartless attacks on people with disabilities and other recipients of public servants, the critical need for home services and fair overtime rules, Rauner’s broad effort to undermine public services throughout Illinois, and his agenda to break the back of workers’ rights and public unions across the state.
Many of Tuesday’s participants will also be traveling to Springfield the following day for Rauner’s third annual budget address, where they’ll raise concerns with their legislators over the harm Rauner’s ‘turn-around’ agenda causes for Illinois residents — from low-income working parents to people with disabilities — who rely on public services and the workers who provide them.
Tuesday’s action is sponsored by the Alliance for Community Services and its members: low income families, people with disabilities, front-line workers, unions and community residents, fighting to put human need before corporate greed.
Source: Alliance for Community Services
Posted by Jim Watkins at 4:33 PM