With her 14-year-old son Danté Herrera bundled up in his wheelchair next to her, Marlo Dean asked a couple of hundred people to put their fists in the air as they protested an 11,000-person waiting list for disability services.

By SARAH KLEINER for the  Richmond Times-Dispatch | 01/31/2017
“What do we do?” Dean asked the crowd gathered outside the Virginia Capitol in the cold morning air on Tuesday.

“We fight,” they said in reply.

“We fight to have what?” Dean said to cheers. “A life like yours.”

Dean was among a long line of parents, advocates and lawmakers who implored the crowd to keep fighting for services for people with disabilities. Herrera, who has Batten disease, a rare and fatal brain disease, has been on the waiting list since he was 3 years old, Dean said.

The government “should be helping people that have problems, that have challenges, that have difficulties,” said Del. Timothy D. Hugo, R-Fairfax. “We’re all God’s children and government has an obligation and a necessity to step up and try to help everybody, to make sure everybody can live life to the best of their capabilities.”

Virginia has for far too long relied on institutionalized care for people with disabilities, said Jamie Liban, executive director of the Arc of Virginia, an advocacy organization.

Even after the federal government required the state to provide care in the least restrictive settings possible — at home, if possible, rather than in institutions — the waiting list for services has been growing. Advocates have urged the state to spend more money on disability waivers, or slots, which provide a variety of services to families in need, such as respite care or home modifications. 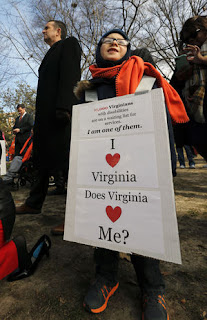 Caroline Conner, 7, has been waiting for a waiver slot to get adaptations in her home, additional nursing, a case manager and extra therapy to keep her muscles from stiffening in certain positions, her mother Marta Conner told the crowd. Caroline has Rett Syndrome, a brain disorder that makes it impossible for her to walk, talk, sit without assistance or use her hands.

Marta Conner said her daughter wears diapers and her food is pureed. She had 85 seizures last year.

Caroline has a lower level waiver that pays for respiratory equipment, but a more intensive waiver would “improve the length and quality of Caroline’s life and also allow us to continue to care for her in our home,” Marta Conner said.

Sen. Barbara A. Favola, D-Arlington, said it’s “shameful” that the waiting list is so long, and she vowed to reduce it.

Democratic Lt. Gov. Ralph S. Northam, a pediatric neurologist in Norfolk, said 70 percent of the children he cares for have disabilities. He said they should have the same educational opportunities as other students in school, and they should be educated in the least restrictive environments possible.

Adults with disabilities should have the same opportunities for employment and access to affordable housing, he said, as he put in a plug for his run for governor.

“I can tell you as the next governor of the commonwealth of Virginia, I’m going to stand up for all of you with disabilities,” Northam said. “I will be your friend, and I hope you will be my friend.”
http://www.richmond.com/news/virginia/government-politics/general-assembly/article_74aa6130-11a0-5c0e-9c31-e31459016866.html
Posted by Jim Watkins at 8:51 AM