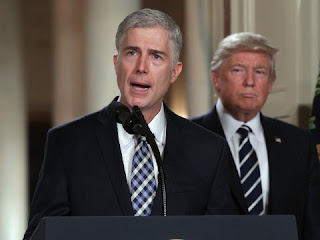 Feb. 3, 2017 -- On Tuesday night, President Trump nominated Neil Gorsuch, a federal appellate judge, as his nominee to replace the late Antonin Scalia to the Supreme Court. As journalists and activists scour through Gorsuch’s judicial record, they would do well to pay attention to his decisions on disability rights.

Assistant Professor Grace Hwang worked at Kansas State University – with great success – for 15 years. After a cancer diagnosis, she requested and received a six-month leave of absence covering the fall 2009 semester while she recovered from a bone marrow transplant. As she was preparing to return to teaching in January, the campus erupted in a flu epidemic. Because a flu infection would have been dangerous, given her compromised immune system, Professor Hwang asked for further short leave, during which she could have worked from home.

The university denied her request, and Hwang sued.

Under established disability rights laws, a request for leave due to a disability must be evaluated on a case-by-case basis to decide whether the request would present an undue hardship to the employer. This is a factual determination. Yet, before any evidence could be presented in the case on whether such an accommodation might present a problem for KSU — a federally funded, multi-million-dollar employer — Judge Gorsuch ruled that Professor Grace Hwang’s request for an additional leave of absence was simply unreasonable.

In his ruling, Judge Gorsuch asserted that “showing up” was an essential job function and opined that the Rehabilitation Act should not “turn employers into safety net providers for those who cannot work.” But this was an error of both fact and law. Of course, it is important that an individual report to work. But Grace Hwang had demonstrated her ability to “show up” for 15 years, and she was even able to telecommute during the flu epidemic. There was no question that she could report to work on campus and that she would be able to do so again. What was at issue was whether the university should allow her a short additional leave as a reasonable accommodation to enable her to return to her full duties.

Judge Gorsuch’s ruling contravened Equal Employment Opportunity Commission guidance, every other circuit decision on the issue, and reasoning from the Supreme Court in U.S. Airways, Inc v Barnett. In Barnett, the U.S. Supreme Court held that a reasonable accommodation may require the modification of a neutral employer rule, even if this functioned as a “preference” for the disabled employee. If Gorsuch followed Barnett’s reasoning in Hwang, the only thing required of the university would have been allowing the professor to work from home for a limited time.

A safety net it is not.

In a second disability rights case, an impartial hearing officer, an administrative law judge, and a federal district court judge all agreed that a young autistic boy, Luke, needed placement in a residential school program due to his total lack of progress in “generalizing” skills — applying skills learned at school to other environments. Judge Gorsuch wrote the opinion reversing. He found that because Luke was making “some progress” toward his education goals in the public school — even though it was undisputed there was no progress outside of school –the school district had met its obligations under the Individuals with Disabilities Education Act (IDEA). But Congress had made it clear that the IDEA should help students make progress toward independent living. Generally, not just in school. The narrow and outdated standard used by Judge Gorsuch is now under review in the U.S. Supreme Court.

One of the primary principles underlying disability rights laws is the idea that there will be times when we need to level the playing field to give people with disabilities an equal opportunity — an opportunity to get an education, to get or keep a job, to be productive members of society. The Americans with Disabilities Act and other disability rights laws recognize financial, practical, and administrative burdens. But the laws also emphasize the individual nature of each situation. An accommodation that works for one person might not work for another. Similarly, what would be required for one employer might be a hardship for another. The court needs to look at the facts, not draw arbitrary, bright-line rules.

Judge Gorsuch rulings on the disability cases in front of him thus far raise important questions about his recognition of the rights of individuals with disabilities, and his willingness to ensure that we receive individualized justice.
https://www.aclu.org/blog/speak-freely/supreme-court-nominee-neil-gorsuch-has-troubling-history-when-ruling-disability

For more from the ACLU, visit: https://www.aclu.org/
Posted by Jim Watkins at 5:45 AM