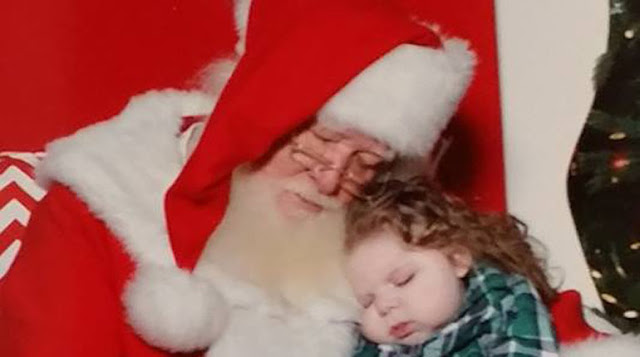 Ryland Wade has epilepsy and spastic quadriplegia cerebral palsy. He's on a special diet to help control his seizures, but still has them multiple times a day.

Just before Samantha Wade took her son to Belden Village Mall on Sunday, he suffered a seizure.

"It really sapped his energy, but we didn't want that to stop him from meeting Santa," Wade wrote.

The event at the mall was for children with special needs, providing a quiet and relaxing environment for them to meet with St. Nick.

"When I set Ryland on his lap, he wouldn't open his eyes for anything," Wade said. "But Santa immediately cuddled with him, and very quietly talked to him for awhile. When it came time for a photo, he pretended like he was snoozing along with Ryland, making for one awesome picture, and a very memorable moment for us." “I was so grateful he did that,” she told Cleaveland's FOX 8's Suzanne Stratford. “Any Santa could’ve smiled but he was intuitive to Ryland's needs.”

Ryland does not respond to seizure medications and that's why his family is sending postcards to Ohio Gov. John Kasich. They are pushing for use of medical cannabis oil in the state of Ohio.