Finding love can be hard enough for anyone, but for those with an autism spectrum disorder, the challenges may seem overwhelming. The disorder can jeopardize the core characteristics of a successful relationship — communication and social interaction. Filmed in a highly personal style, Matt Fuller’s Autism in Love offers a warm and stereotype-shattering look at four people as they pursue and manage romantic relationships. 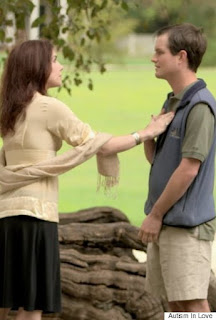 Thirtysomethings Dave and Lindsey have been together for eight years. Both “high functioning” and employed, they met at a conference on autism and, through the years, have learned to cope with each other’s quirks and different ways of communicating. The couple contemplate marriage, despite misgivings.
Lenny, who lives in Los Angeles with his single mother, constantly struggles to accept that autism will always be part of who he is. The biggest hurdle in his life, the label has made meeting and dating girls seemingly impossible. Frustrated and angry, he spends his time watching sports, playing video games, and just trying to fit in, confiding that he “would rather be a normal man than an autistic person with a million dollars.”
Meanwhile, Stephen’s autism manifests itself in more obvious ways than the others we meet in the film, but even his detached affect and monotone speech are no barrier to love. After 20 years of marriage to Gita, they are faced with the ultimate test of terminal illness. Despite his limited speech and her physical deterioration, their love persists as Stephen supports Gita in her battle with ovarian cancer.
Autism in Love shows us the wide range of perspectives on the spectrum, as it asks the question, “What happens when children with autism become adults and want to have lives of their own?”
Autism in Love - Exclusive Clip - Love is a Force
YouTube clip published by autisminlove

For more on PBS Independent Lenses
“Autism in Love”Documentary:http://www.pbs.org/independentlens/films/autism-in-love/

For Facebook page on "Autism In Love": https://www.facebook.com/AutismInLove/
# information in this post is from PBS, and filmmakers websites.
Posted by Jim Watkins at 9:53 AM