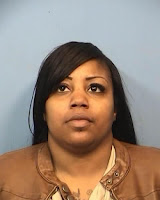 A Chicago caretaker was sentenced to six years in prison Friday for stealing from two patients, including a woman living her last days in hospice care.

Latesha Miller, 38, (pictured) pleaded guilty Friday morning to one count of aggravated identity theft and one count of financial exploitation of an elderly person, both Class 2 felonies, according to a statement from the DuPage County state’s attorney’s office.

Miller was working for a home healthcare agency when she stole two checks from a Winfield woman in her care, the state’s attorney’s office said.

Miller allegedly wrote a second check to the friend in the amount of $6,856, but the friend could not cash it because the account had been frozen, prosecutors said.

The victim was a woman receiving hospice care in her home, and has since died, authorities said.

Miller is also accused of stealing a credit card and several checks from an 86-year-old woman living at the Spring Meadows senior living facility in Naperville in August 2013, prosecutors said.

At the time, Miller was working as a certified nursing assistant at the facility. She used the victim’s credit cards to make personal purchases, and made unauthorized deposits into her own bank account from the victim’s checking account, prosecutors claim.

Judge Brian Telander sentenced Miller, who lives in the 7300 block of South Wolcott, to six years in the Illinois Department of Corrections.


“[Miller’s] victims, an 86 year-old woman and a terminally ill woman, needed medical help in their daily lives and trusted Ms. Miller to provide that help,” DuPage County State’s Attorney Robert Berlin said in the statement. “Ms. Miller however, had no intentions of helping these women. She saw them as nothing more than easy targets.”

Miller will be required to serve at least 50 percent of her sentence before she is eligible for parole, prosecutors said. She was also ordered to pay $9,420.16 in restitution