Madison Tevlin, Singing Teen with Down Syndrome on Internet fame 'I was so surprised'

ALL OF ME- COVER BY MADISON TEVLIN

YouTube Published on Jan 20, 2015
This Astounding 12 year Old, is defying all statistics and odds associated with having Down's Syndrome and Singing. She is a true inspiration to all. WATCH THIS VIDEO CLOSELY. LISTEN TO THIS VIDEO CLOSELY. READ THIS VIDEO CLOSELY. BE INSPIRED.
All video content and images are copyright to the artist Madison Tevlin. © MADISON TEVLIN, 2015

A Toronto teen who went viral with a rendition of John Legend's "All of Me" earlier this year said she's "so surprised" by the attention she's received since she posted the video.
Madison Tevlin, a 13-year-old with Down syndrome, covered the chart-topping song in January with the help of her vocal coach. 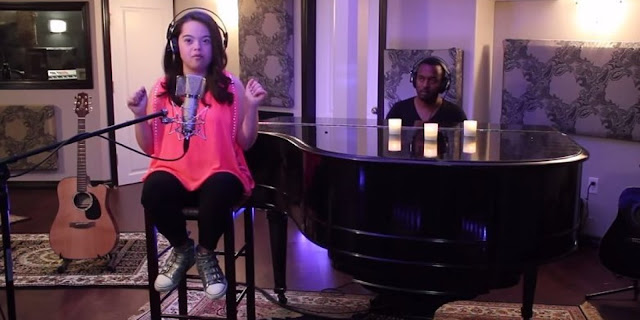 article by Janice Golding and Kendra Mangione, CTV Toronto | Dec 24, 2015
"Singing is my passion and I love to do it," Tevlin told CTV Toronto's Janice Golding, who caught up with the teen for an update in December.
Her music coach asked her to record the video to inspire his other clients who have special needs. The video was uploaded to YouTube and quickly went viral.
It was shared on Twitter by the singer himself, and was also tweeted by actor Ashton Kutcher.
"I was so surprised at what happened. (The video) was only really for our family and friends to see, but then it just went viral."
By December, Tevlin's video had been viewed more than 7.6 million times. She told CTV Toronto she hopes it will be seen by 21 million people in time for World Down Syndrome Day, March 21.
Tevlin said she continues to receive hundreds of messages of support from the video.
"Thanks for making this world more beautiful, you are amazing," one of the messages said.
The video highlighted challenges people with Down syndrome face -- those with the condition generally have issues with hearing, tone and communication -- but also showed what can be accomplished with hard work.
"Maybe watching this video, some parents will actually get some strength, and think, 'You know what? Look at what can be and what our child is capable of,'" Tevlin's mother, Grace, told CTV Toronto.
The teen also demonstrated what she was capable of in July, as the ambassador of the 2015 Special Olympics World Games, which took place in Los Angeles.
Tevlin and Breanna Bogucki, a U.S. teen with autism, worked with pop singer Cody Simpson and O.A.R. rocker Mac Roberge to record the theme song for the games.
The song, called "Reach Up," was performed live at the opening ceremony live on July 25.
In the months to come, Tevlin will be featured on two episodes of "Mr. D," and will also be appearing on a Family Channel show. Her mother said she'd also been contacted by a Hollywood casting director, who expressed an interest in having the teen audition for a movie.
With a report from CTV Toronto's Janice Golding
http://toronto.ctvnews.ca/i-was-so-surprised-teen-with-down-syndrome-on-internet-fame-1.2713765
Posted by Jim Watkins at 8:55 AM