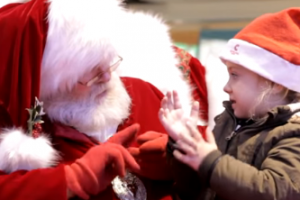 A touching moment unfolded at the Cleveland Centre mall in Middlesbrough, England on Saturday when a hearing-impaired girl sat on Santa's lap.
Her mom told Jolly Old St. Nick that the girl couldn't speak very well — but it turns out that didn't matter.
The girl told Santa that she wanted a scooter for Christmas. The pair managed to communicate using sign language.
The YouTube video, uploaded the same day, had drawn almost 300,000 views as of Monday (Dec. 7th, 2015) afternoon. Many YouTube readers posts said the exchange made them cry.
If this doesn't put you in the Christmas spirit, we don't know what will.
YouTube Published on Dec 5, 2015
"Mali Phoenix Williams-Cody, aged 3, has visited the Cleveland Centre's special event days several times. I have some great photos of her at Halloween as well as Christmas. She came with her mum on Saturday to meet Santa. Mali is not deaf, she struggles to communicate with speech and language. She has been attending a special school to help with her communication and this is were she learned sign language. As seen in the video, Santa asked Mali’s mum if she could sign and touched hearts all over the world when he sprung in to action signing to Mali if she wanted a doll for Christmas. Her reaction is priceless and touched all of us who witnessed it live. I was so pleased I could capture such a special moment and share it with the world."
Posted by Jim Watkins at 9:33 AM