A report released by the Chicago Department of Public Health (CDPH) today reveals that the number of new HIV diagnoses in Chicago continues to decline for the 13th year in a row. According to the 2015 HIV/STI Surveillance Report, the number of new HIV infection diagnoses fell to 973 in 2014, down 48% from 2001. Chicago is also ahead of the nation in linking newly diagnosed HIV positive individuals to care and ultimately to viral suppression. CDPH released the report today in observation of World AIDS Day, and will conduct a host of events and outreach to generate awareness among Chicagoans. 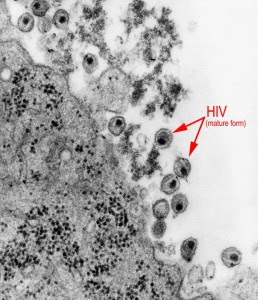 Image/HIV-CDC
“Chicago continues to make real progress in our fight against HIV and STIs because of a coordinated and collaborative effort,” said CDPH Commissioner Julie Morita, MD. “These initiatives build on our past success and will help ensure every resident has the information and resources they need to stay healthy.”
Awareness and education has been essential to reducing the incidence of HIV and STI. To help further reduce rates of HIV and other sexually transmitted infections (STIs), CDPH joined Mikva Challenge to launch a citywide condom education campaign. The new Chicago Wears Condoms campaign, which also launched today, was developed by local students and features ads across CTA stations. It includes a comprehensive social media effort, hashtag #ChicagoWearsCondoms, and website,ChicagoWearsCondoms.com, to promote condom use, especially among young adults. As part of the campaign, volunteers will distribute condoms at six City Colleges of Chicago and at area Chicago Transit Authority (CTA) stations.

“We wanted to create a campaign to target youth in a positive way,” said Heaven Johnson, a senior at Lindblom Math and Science High Academy, a student who collaborated on the development of the concept.  “Youth want to hear solutions driven by our own ideas and experiences and Chicago Wears Condoms is one solution. We hope this campaign leads to an open and honest conversation.”

Annually, CDPH invests resources in proven HIV and STI prevention interventions like condom distribution,Pre-Exposure Prophylaxis (PrEP), testing and treatment. Data from the surveillance report is used each year to identify health disparities and inform planning and programming to reach the most vulnerable communities.
As mentioned, the 2015 Surveillance report shows that the number of new HIV diagnoses have followed a declining trend. Among other findings included in the report:
The report’s outcomes are encouraging but we know more can be done to ensure Chicago residents can continue to benefit from improved services,” said Dr. Morita.  “In Chicago are optimistic that these numbers can continue to improve through greater partnerships.”
To improve service delivery, CDPH is also seeking to identify new community partners to help expand services to individuals living with HIV in Chicago. Through the launch of a new Request for Proposal(RFP), available atwww.cityofchicago.org/health, CDPH is seeking to identify trusted community-based partners to expand primary care services for individuals living with HIV. Through this RFP, it is CDPH’s goal to expand services in community areas where they are needed most.

“A key reason we have seen a decline in HIV diagnoses over the last 13 years is our partnerships with community-based organizations that provide quality education and care in our neighborhoods,” Dr. Morita continued. “Under this new proposal, we will be able to provide more treatment services to more people. We know that when individuals are in care, they live longer, healthier lives and are less likely to transmit HIV.
http://outbreaknewstoday.com/chicago-hiv-diagnoses-continue-decline-12976/
Posted by Jim Watkins at 4:30 PM