The Sesame Street gang has introduced a new muppet, Julia a character with autism, will be introduced through the Sesame Street and Autism: See Amazing in All Children initiative. Julia is a muppet that is a preschool aged kid who "does things a little differently when playing with her friends," Julia will be featured in an app aimed at children with autism and their families. The new content was developed for autistic children for ease of use. The features will include larger buttons and audio-off options to name a few. 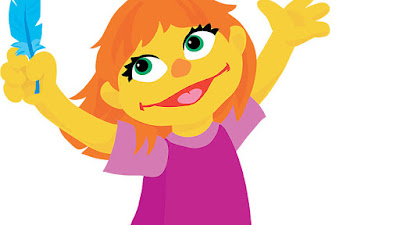 “Sesame Workshop is uniquely positioned to play a meaningful role in increasing peoples’ understanding about autism,"
"an extension of the belief we’ve always promoted: ‘we are all different, but all the same."

Sesame Street has over the years added characters to fit the changing needs of the children who make up its audience. The show introduced in 2013 a character who had a parent in prison, and the South African version of Sesame Street features a character who is HIV-positive.
Posted by Jim Watkins at 6:56 PM