A 21-year-old Ontario student named Godfrey thought he was in for an ordinary bus ride home. Little did he know, he’d soon be hailed a hero for the most incredible reason. Minutes after Godfrey boarded a crowded express bus, he was approached by a middle-aged man named Robert, who he’d never met before. Robert started shaking Godfrey’s hand and wouldn’t let go. At first, Godfrey thought this was some kind of joke – but he soon realized the truth.

Robert is deaf and has cerebral palsy. As soon as Godfrey realized that Robert has special needs, he found the man showering him with affection and leaning on him for comfort for the duration of the 30-minute bus ride.

At first, Godfrey was unnerved and admittedly “freaked out” by the stranger’s forwardness, but he ultimately decided to do something most people wouldn’t dare. “This was my first time encountering such a thing,” Godfrey says. “I thought, you know what, I’m just going to allow it. I’ll let him do his thing. I’ll comfort him.’”

What happened next is nothing short of amazing, and thank God it was captured on camera. Keep reading to find out why this story has everyone talking…

While so many other people would reject this type of interaction, Godfrey knew the most humane reaction would be to accept and allow it. What a remarkable man.! 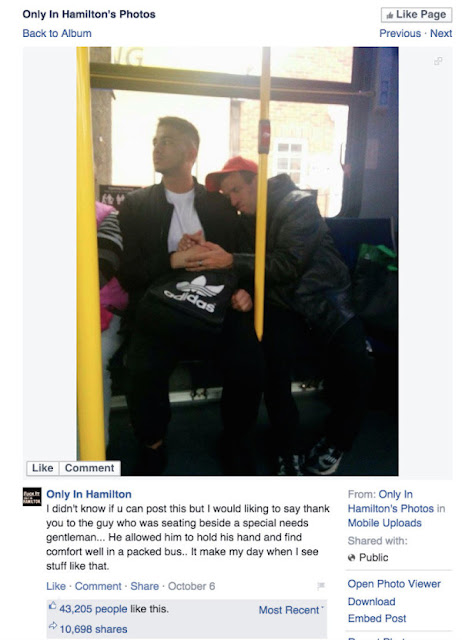 Robert’s niece reached out to Godfrey, thanking him for his kindness. She says Robert is often rejected by strangers, which is something Godfrey saw for himself. As he was getting off the bus, Godfrey saw Robert approaching another man for a hug -- but the man simply shrugged him off and walked away.

* article is from numerous sources via internet.
Posted by Jim Watkins at 10:08 AM