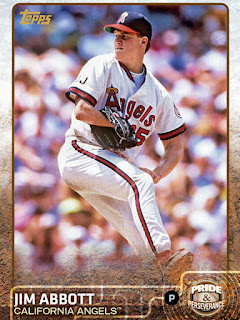 Topps “Pride & Perseverance” Series celebrates Major League players from the past and present who have triumphed in spite of disabilities that have come their way. Update released on Wednesday, which marks the 70th anniversary of National Disability Employment Awareness Month. It also honors 25 years of the Americans with Disabilities legislation.

The 12-card set features current and former Major Leaguers, including:
– Chicago Cubs pitcher Jon Lester and first baseman Anthony Rizzo, who are both cancer survivors
– San Francisco Giants pitcher Jake Peavy, who is legally blind without his corrective lenses
– Houston Astros outfielder George Springer, who has overcome stuttering– New York Mets reliever Buddy Carlyle, who was diagnosed with diabetes in 2009
– Oakland Athletics outfielder Sam Fuld, who has dealt with Type 1 Diabetes
– Jason Johnson, a diabetic former pitcher who was the first MLB player to wear an insulin pump during regular season games
– Jim Abbott, who won a gold medal for the 1988 U.S. Olympic baseball team and threw a no- hitter for the New York Yankees in 1993, despite being born without his right hand
– Jim Eisenreich, who played 15 years in MLB and won the 1997 World Series with the then- Florida Marlins, who was born with Tourette’s syndrome
– Curtis Pride, a former 13-year MLB player, who was born deaf
– Pete Gray, a former outfielder who played for the St. Louis Browns in 1945 and spent six seasons in the minor leagues, despite having lost an arm in a childhood accident
– William Hoy, a former center fielder was one of the first and most accomplished deaf players in the major leagues, having played from 1888-1902

“The importance of this set cannot be overstated,” said David Leiner, VP & General Manager of North American Sports and Entertainment for Topps. “These men had to overcome great odds to not only make it to the Majors, but at times with what could have been a disadvantage. Instead, they are an inspiration and we are honored to showcase them in our product.

“People with disabilities are often looked at for what they can’t do instead of being appreciated for what they can do. We hope these cards will help people take a closer look at the potential of people with disabilities,” said Mark O’Neal, PBATS President and Chicago Cubs Director of Medical Administration. “Imagine if a child or the parent of a child with a disability, by simply opening a pack of baseball cards, discovers that one of their heroes was legally blind or deaf or has battled cancer? They would truly feel empowered and encouraged.”

Singles, lots and sets of 2015 Topps Pride and Perseverance available on eBay.
Posted by Jim Watkins at 9:52 AM