As House Republicans hurtle toward shifting the nation’s health-care system onto a more conservative path, nearly lost so far in the roiling debate over their plans is the profound impact they would have on insurance for the nation’s poorest and most vulnerable residents.

Important article by Amy Goldstein and Juliet Eilperin , for the Washington Post | March 12, 2017
The proposed American Health Care Act would break with the government’s half-century-old compact with states in helping to finance Medicaid, which covers 68 million low-income people, including children, pregnant women and those who are elderly or disabled. The House GOP’s legislation would end the system in which the government pays each state a specific share of all its Medicaid costs and instead would provide a fixed sum for each beneficiary — no matter how much or little of the costs that funding covered.

These stark changes to the underpinning of the nation’s health-care safety net were seldom broached by the House Energy and Commerce Committee, the panel with jurisdiction over Medicaid, as it met for 27 hours straight before approving the legislation last week. But they could prove to be the biggest stumbling block to Republicans’ efforts to undo the Affordable Care Act — especially if the plans move on to the Senate.

Since two House committees produced bills a week ago to jettison central parts of the ACA, the political pyrotechnics on Capitol Hill have largely focused elsewhere. Lawmakers in the GOP’s most conservative faction are enraged by a new tax credit that would help some Americans afford health plans; Democrats have seized on aspects that would end the ACA’s insurance subsidies, its penalties for people who remain uninsured and its expansion of Medicaid. 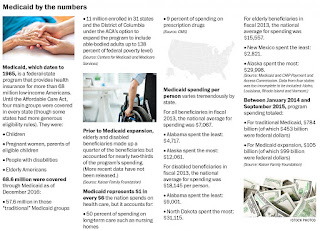 But behind the scenes, unlikely bedfellows with a common stake in traditional Medicaid’s status quo have begun to mobilize. They include governors of both parties, insurers, the hospital industry and patient advocates.

“Many people who have health care are going to lose it,” said J. Mario Molina, president and chief executive of Molina Healthcare, an insurer that covers about 3.5 million Medicaid recipients in 12 states and Puerto Rico.

In the seven years since the health-care law was passed by a Democratic Congress, much of its perceived success or failure has hinged on the marketplaces created for Americans who cannot get affordable coverage through a job. But Medicaid’s reach is far greater. Even excluding the 11 million people who joined when the ACA allowed states to expand their programs to cover people with incomes up to 138 percent of the federal poverty level, Medicaid still covers 57 million people, nearly six times as many as those marketplaces.

Ever since its gen­esis in the mid-1960s as part of Lyndon Johnson’s Great Society, Medicaid has been a shared responsibility of the federal government and states. The government requires every state to cover certain medical services and dictates groups of people and the basic income levels that states must include. Beyond that, each state can add optional services and residents. The share the government pays varies, depending on a state’s wealth.

House Republicans, eager to rein in the massive program’s spending, would end that basic arrangement between the two levels of government.

“Ballooning costs are threatening the very viability of the program and our fiscal future,” House Speaker Paul D. Ryan (R-Wis.) said Thursday. “So what we propose is to modernize the Medicaid program.”

An official assessment of the Medicaid proposal will be part of widely anticipated estimates the Congressional Budget Office is due to release as early as Monday, forecasting the House GOP legislation’s impact on federal spending and the number of Americans with health coverage.

Even its proponents acknowledge the Medicaid shift would cause pain. “If you put in a per capita cap, it’s going to be relatively harder on the states than it has been,” Scully said. “But it’s totally the right thing to do. There have been no incentives on the states to be fiscally cautious. The bank was open.”

Others disagree. Molina and fellow critics anticipate that the federal payments would not keep up with Medicaid costs. The Republicans’ legislation would start the new funding method in 2020, basing the government’s payment to a given state on the proportion of people in each subcategory who were on the Medicaid rolls as of 2016. After that, yearly increases would hinge on the medical part of the consumer price index — 3.6 percent by the most recent federal figure. States that spend more than their federal allotment in a year would be penalized the next.

The critics are concerned about whether the proposed formula would adjust as the population ages to accommodate a larger pool of low-income elderly, who tend to be expensive to treat. The bill’s summary does not specify that, but House committee staff said Sunday night that the legislative intent is to include such a mechanism.

But payments would not adjust if research yielded beneficial but expensive new therapies in the future, such as a blockbuster drug to treat Alzheimer’s disease, said Vikki Wachino, who directed Medicaid during the Obama administration’s final years. Even now, the medical CPI is not keeping pace with drug costs.

The left-leaning Center on Budget and Policy Priorities, a defender of the ACA, is predicting that the Republican plans’ switch to a per-person Medicaid allotment would shift $116 billion in spending to states by 2027.

With Medicaid covering nearly two-thirds of Americans in nursing homes, the legislation’s critics contend that the elderly and people with disabilities would be especially vulnerable.

“You’re basically either consigning the seniors to less care or the commonwealth of Pennsylvania to spend more money, or a combination of both,” said Gov. Tom Wolf (D-Pa.). “That’s a real problem.”

More than a half-dozen Republican governors suggested in a draft plan last month that the per-person allotment start only for able-bodied adults on Medicaid, whose costs are more predictable because most already are in managed-care plans. Each state then could choose whether to add more people. Otherwise, “it’s kind of an all-at-once, flip-a-switch experiment,” said a staffer familiar with the governors’ ongoing discussions to refine their plan and send it soon to Congress.

In Florida, Medicaid recipients account for two-thirds of the residents in 14 nursing homes that Palm Gardens runs. The company’s senior director of service, Luke Neumann, noted last week that it already spends $16 per day more than the program reimburses for each of those recipients. Payment cuts would make it “more challenging to find good caregivers” and to pay them, he said.

And in Texas, a leader of the national disability rights group ADAPT said he fears that Medicaid programs would end up eliminating home- and community-based services that keep people out of nursing homes — because those are optional benefits.

“What the Republican plan is doing . . . is basically a war on disabled people,” state organizer Bob Kafka said. ADAPT has designated the first three days of this week as “Twitter days of action,” urging its members to send online protests to U.S. lawmakers.

Online Petition:
Urge Congress to Save the Community First Choice Option and other Provisions of the Affordable Care Act!
Posted by Jim Watkins at 3:57 PM