Arnold Schwarzenegger has inspired many of us. Whether through his meteoric rise as a an Austrian bodybuilder who became an international movie star or his pursuit of public office, he’s been one of those who managed to rise from difficult circumstances to the highest heights the world has to offer.

wonderful article by Jesse Reed for Sportsnaut | March 24, 2017
So when Schwarzenegger is inspired by others, you know those people are truly amazing. The former Governor or California shared a post on Facebook celebrating the Special Winter Olympians who won gold, making it clear they are an inspiration to him.

“So inspired by the athletes I’m meeting at Special Olympics World Games 2017 in Austria,” Schwarzenegger wrote on his Facebook page.

Of course, as we find everywhere on the Internet, at least one troll attacked these awesome athletes and people. But Schwarzenegger wasn’t having any of it.

Schwarzenegger not only slapped down this troll but challenged him to “take their path — you could learn from them, and try to challenge yoursle, to give back, to add something from the world.”

This was just the embodiment of class and tremendous response to someone who clearly doesn’t understand just how amazing the people are who compete in the Special Olympics. Well done, Arnold Schwarzenegger. We salute you. 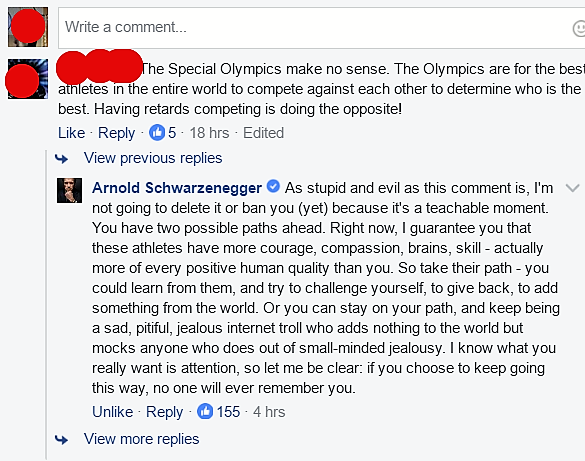