The race for Senate here in Illinois is contentious and potentially historic. 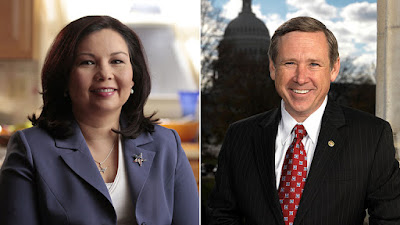 Both Republican incumbent Sen. Mark Kirk and his Democratic challenger, Rep. Tammy Duckworth, are physically disabled and often use a wheelchair. Kirk suffered a massive stroke in 2012; his left side is partially paralyzed. Duckworth lost both her legs and partial use of her right arm in 2004 after the Black Hawk helicopter she was piloting in Iraq was shot down.

“We know the next senator for Illinois is going to be in a wheelchair,” Kirk said in a recent interview, his speech slurred and a cane by his side.

It’s a long way from the era when politicians kept their disabilities a closely guarded secret. Franklin D. Roosevelt and his aides tried to minimize the public appearance of the president in a wheelchair or using braces. John F. Kennedy hid the extent of his crippling back pain.

Change started to come over the following decades, with disabled veterans including Max Cleland of Georgia and Bob Dole of Kansas winning congressional seats and the Americans With Disabilities Act passing in 1990. The U.S. Senate floor still isn’t wheelchair accessible; Rep. Jim Langevin (D-R.I.), a quadriplegic, was responsible for adding ramps to the House side and making the speaker’s rostrum handicap accessible.

Here in Illinois, the Senate race between two people with disabilities is widely seen as a landmark — and comes during the same election cycle when the Republican presidential nominee mocked a reporter with a disability.

“I think it’s just another milestone, and in any civil rights movement you sort of lift up those milestones,” said Helena Berger, president and chief executive of the American Association of People with Disabilities.

Others, including the Democratic challenger, think it’s just another race.

“I don’t think it’s really a big deal,” Duckworth said. “I just do my own thing. I get out there and I campaign.”

But in an about-face from the days of FDR, some politicians now see an advantage in talking about their disabilities, discussing them in ads, interviews and public appearances as evidence that they can overcome obstacles and lead.

Texas Gov. Greg Abbott (R), who became a paraplegic after an accident while jogging in his 20s, released an ad during his 2014 gubernatorial campaign showing him rolling his wheelchair into an empty parking garage. It was a routine he took on after his accident to rebuild his strength.

“I would roll up an eight-story parking garage, spending hours going up the ramps,” he said, as the camera showed him doing just that. “It would get harder and harder, but I wouldn’t quit.”

It’s a story Abbott now often tells in public. In another ad about traffic problems on Texas roads, Abbott says, “A guy in a wheelchair can move faster than traffic on some roads in Texas.”

During the race, opponent Wendy Davis (D) released a controversial ad attacking Abbott for opposing litigation as attorney general that was similar to a case he won after his accident.

“A tree fell on Greg Abbott,” the narrator says. “He sued and got millions. Since then, he’s spent his career working against other victims.”

Davis was lambasted for the ad and lost overwhelmingly to Abbott on Election Day.

In Illinois, both candidates have released ads focusing or touching on their disabilities. Kirk spent months in a rehabilitation facility, a time during which he said he was depressed, lying in bed watching what he called the “blue blacks” — the blue of the daytime sky and black of night.

He allowed his recovery to be filmed, spurred in part by a local politician who kept his stroke a secret. In a minute-long ad released in May, Kirk chronicled his recovery, showing footage of him in a harness, learning how to walk again, and walking up the stairs of the Willis Tower.

“As I learned to walk and climb again, I thought about Illinois families struggling to get by. I thought of our veterans and our heroic men and women serving in harm’s way. They’re the reason why I fought so hard to get back,” Kirk said in the ad, titled “Courage.” Kirk walked up the steps of the Senate on his first day back at work and said his stroke has made him a more empathetic person.

In another ad, Kirk defends his decision to reverse his endorsement of Trump, his abortion rights views and his call for a vote on the confirmation of President Obama’s Supreme Court nominee, Merrick Garland.

“Long before his stroke, Mark Kirk was independent,” a narrator says.

Kirk’s doctor released a letter Wednesday stating that the senator has made a “full cognitive recovery” and that he is quickly recuperating physically. Richard G. Fessler, of Rush University Medical Center in Chicago, wrote that Kirk has no use of his left arm or hand and has limited use of his left leg. Fessler said Kirk walks with the aid of a cane and brace and that he is not likely to regain a full range of motion on his left side.

Duckworth has long discussed the attack on her helicopter, her recovery and wounds. An ad released this cycle shows footage of her recovering at Walter Reed National Military Medical Center. Duckworth started participating in marathons after her accident, first as a member of the “Missing Parts in Action” team at Walter Reed and later on the Achilles International Freedom Team.

“It gave me courage to run for office in the first place,” Duckworth said of being shot down and recovering. “At the end of the day nothing will ever be as bad as that one day in Iraq and those months in the hospital.” 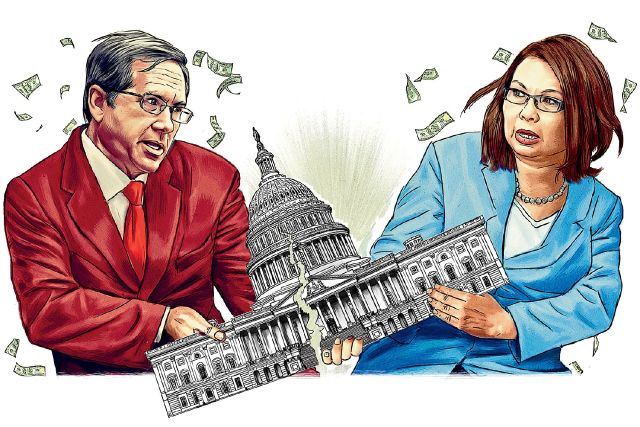 Disabilities aside, the race between Kirk and Duckworth has been typical of a hard-fought battle for a Senate seat. Kirk, who served in the Navy, has accused Duckworth of not properly caring for veterans when she was director of the Illinois Department of Veterans Affairs and later an assistant secretary at the federal VA. Duckworth has slammed Kirk for embellishing his military record and walking back his endorsement of Trump. In June, Kirk said he could no longer support Trump given his past attacks on women, Hispanics and “the disabled like me.” Each candidate has accused the other of not doing enough for Illinois residents and of being ineffective.

Kirk has criticized Duckworth for being the subject of a lawsuit alleging workplace retaliation while she oversaw the state veterans agency. A $26,000 settlement was announced in June with no finding of wrongdoing, although the plaintiffs later rejected the offer and the matter remained unresolved. Kirk also accused her of giving jobs to “happy fun boys” at the Illinois VA.

“They’re political operatives,” Kirk said. “You know, it’s always Joe and Mino or whatever, you know, overweight, too many hot dogs. Those kind of guys.”

The National Republican Senatorial Committee was criticized in March for tweeting that Duckworth has a “sad record of not standing up for our veterans.”

Duckworth pointed to Kirk having to apologize in 2010 for making inaccurate statements about his time in the Navy Reserve.

“The man has lied about his own military record. . . . I doubt that he can be trusted to tell the truth about an opponent’s military service,” Duckworth said.

In August, Duckworth called Kirk “unhinged” and said the senator “lacks the ability to control what he’s saying” after Kirk said Obama was “acting like the drug dealer in chief” after the administration said it made a $400 million cash payment to Iran in January. Duckworth said her comment had nothing to do with Kirk’s stroke but was a reflection of his record. Kirk’s campaign said it was a “cheap shot” and continued to hammer the Obama administration over its Iran policy and Duckworth for supporting the president.

Both candidates admit that campaigning, an inherently exhausting endeavor, is even tougher when disabled.

“I can’t work a reception like I used to,” he said. “Working a reception from a wheelchair is pretty tough, and I’m sure that Tammy has the same challenge.”

Duckworth said campaigning is exhausting, but so is caring for her daughter, who was born in November 2014.

She insists that her office and all of the events she attends be wheelchair accessible, not only for her but also for others who might want to attend. She gets phantom pain if she sits in what’s called a bucket — it covers her right side and the inch of leg she has left — for 10 to 14 hours at a time, a normal day for her.

“It sucks and you’re tired, but this is important to me and this is important to my community and important to my state and important to my nation,” she said. “For me to go home and feel sorry for myself and do nothing because I lost my legs . . . would spit in the face of the men who carried me out of that field in Iraq, and I’m just spending every day trying to pay back a debt that I can never pay back.”
https://www.washingtonpost.com/politics/in-illinois-a-landmark-senate-race-between-two-physically-disabled-candidates/2016/09/17/08936d2a-5fdf-11e6-9d2f-b1a3564181a1_story.html#comments

# Katie Zezima is a national political correspondent covering the 2016 presidential election. She previously served as a White House correspondent for The Washington Post.
Posted by Jim Watkins at 11:03 AM