Social Security Judge stripped of disability cases, not job due to notes with racial and sexual terms

Madison — A federal official has been stripped of his casework but still holds his six-figure job at the Social Security Administration office here despite describing disability claimants in his hearing notes with racial and sexual terms such as “gorilla-like” and “buxom.” 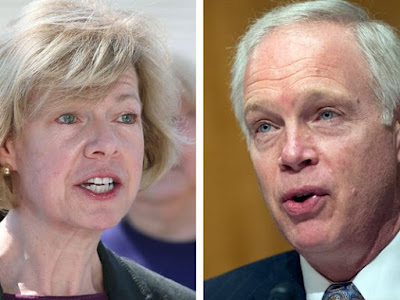 Wisconsin's U.S. senators Tammy Baldwin (left), a Democrat, and Ron Johnson (right), a Republican, have called for a quick and thorough review of allegations of retaliation against whistleblowers in the Madison office of the Social Security Administration.(Photo: Getty, Milwaukee Journal Sentinel)

article by Haley Henschel for the Milwaukee Journal Sentinel | Sept. 5, 2016

Administrative law judge John H. Pleuss has been removed from the list of judges within the computer system at the Social Security’s Madison Office of Adjudication and Review, and all of his 60 cases through the end of 2016 have been reassigned, according to two whistle-blowers from the administration and a copy of the list provided to the Milwaukee Journal Sentinel.

Social Security Administration regional spokesman Doug Nguyen confirmed that Pleuss, who is being investigated by the administration’s Office of Inspector General, is still employed by the administration. But he declined to comment on the reassignments or any possible suspension because “we are prohibited from commenting on specific personnel matters.”

Nguyen declined to say what work, if any, is currently assigned to Pleuss, who earned $167,359 last year, according to a database of federal employees’ salaries.

Pleuss did not respond to a request for comment, nor did a union that represents him and other federal administrative law judges.

Marilyn Zahm, president of the Association of Administrative Law Judges, has previously said Pleuss did not discriminate against claimants and regrets having written the descriptions in his notes.

Deb Holland, a Social Security employee and former group supervisor at the administration’s Madison office, said she doesn’t know what agency management has instructed Pleuss to do, since he apparently is no longer allowed to have anything to do with hearings or case decisions.

Holland criticized Pleuss’ ongoing salary as a “waste of taxpayer dollars” but said she was pleased that Pleuss is not deciding cases at the moment.

Although Pleuss remains at the Madison office in some capacity, office director Laura Hodorowicz and group supervisor Wayne Gentz have both been removed from the hearing office and its directory, according to Holland, lead case technician Machelle Keller and a copy of the directory provided to the Journal Sentinel.

Hodorowicz and Gentz are still employed by Social Security, said Nguyen. The Social Security spokesman declined to say where the two supervisors are working or what jobs they are performing at taxpayer expense, once again saying he can’t comment on personnel matters.

Wisconsin's U.S.senators, Democrat Tammy Baldwin and Republican Ron Johnson, and Johnson's Democratic opponent in the November election, Russ Feingold, have all called for a swift review of the alleged problems at the Madison Social Security office. Johnson, the chairman of the Senate Homeland Security and Government Affairs Committee, wrote the agency last month to say that his panel will not "tolerate any efforts to silence or retaliate against SSA whistleblowers."

Employees at the Madison office have been ordered not to speak to the media and to direct questions to the administration's regional headquarters since the allegations against Pleuss surfaced, according to Holland and Keller.

Holland, who said she has faced ongoing retaliation from Social Security management for demanding they take action on Pleuss since January 2015, was stripped of her supervisory duties in Madison and reassigned as a project manager at the administration’s regional office in Chicago in mid-August, the Journal Sentinel has reported.

Holland was also placed on medical leave for two weeks after her doctor called for it because of the stress of her work environment, which she said triggered symptoms of a neuromuscular condition from which she suffers. Holland resumed her duties for the regional office Monday but continues to work remotely.

Keller has also been working at home after receiving a note from her neurologist saying that the Social Security’s office environment was the cause of her frequent, severe migraines, and she filed for worker's compensation Thursday for workplace stress and migraines, she told the Journal Sentinel.

“The daily harassment by management has left me with no other choice,” Keller said.