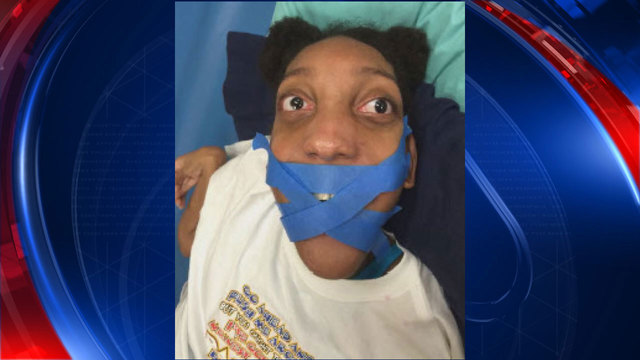 Ann Arbor, Michigan - The mother of a severely disabled student is suing the Washtenaw Intermediate School District and educators for allegedly taping her mouth shut and other abuse dating back more than a decade.

article by Mark Hicks for The Detroit News | Nov. 1, 2017
Doreen Smith alleges in a lawsuit filed Wednesday in U.S. District Court that she withdrew her daughter from Ann Arbor’s High Point School after learning about a February incident in which a staffer reportedly slapped the now 27-year-old. But, according to the complaint, it was the latest in a series of troubling episodes at the school that serves special needs students.

According to the lawsuit, teacher Nesa Johnson forcefully taped the student’s mouth shut in March 2016 because “she was ‘making noise,’ ” then texted a photo to Smith captioned: “Help. She won’t be quiet!!!”

Smith’s daughter, who has cerebral palsy, cognitive disorders, seizures and other issues, had been attending the school since 2004. She cannot speak, weighs less than 70 pounds and relies on assistance, the court filing read.

That same year, the student received third-degree leg burns when scalding hot coffee was spilled on her, the suit claims. Staffers claimed she hurt herself, but Smith’s daughter “lacks the manual dexterity to move her arms in such a way that she would have the ability to reach out and knock over a container of liquid,” an attorney said in the lawsuit.

After Smith complained, her daughter was transferred to a classroom led by Johnson, but she “continued to suffer abuse and neglect,” according to the complaint.

The student sustained significant arm injuries while under the teacher’s care in 2007, Smith claims.

Smith asserts her daughter also was locked in a bathroom and had returned home on other occasions with bruises, facial scratches, soiled diapers and appearing to have been over-medicated. She claims her complaints to the district and then-principal Anne Nakon did not result in any immediate action.

The suit alleges that the student’s rights were violated and the incidents affected her health. It seeks damages and attorney fees.

The lawyer representing the district, Tim Mullins, did not immediately respond to a request for comment Wednesday night.

In a statement Wednesday, district officials said: “The Washtenaw ISD wants to assure the parents of our district that we take the health, safety and education of all of our students very seriously. As to the subject of this lawsuit, the family did not report this, or any other complaint to the district until nearly a year after it occurred. During that subsequent year, the student continued attending school, in the same classroom, with the same teacher. When we were first informed of the family’s concern, we immediately conducted a complete investigation and took appropriate remedial action.”

Neither Johnson nor Nakon work for the district any longer, spokeswoman Emma Jackson said late Wednesday.

Efforts to reach Johnson were unsuccessful.

In an email, Nakon told The Detroit News: “I was unaware of this suit and had no reason to suspect there was any harm to a student while working at the WISD. I was contacted regarding these allegations several months ago and shared that I was unaware of any misconduct toward this student or any student. I have not been contacted since. I would never condone such a behavior and, had I been made aware of or suspected any mistreatment of a student, would have immediately investigated the situation to protect the student.”
http://www.detroitnews.com/story/news/local/michigan/2017/11/01/ann-arbor-suit-disabled-pupil-mouth-taped-shut/107255358/
Posted by Jim Watkins at 9:19 PM