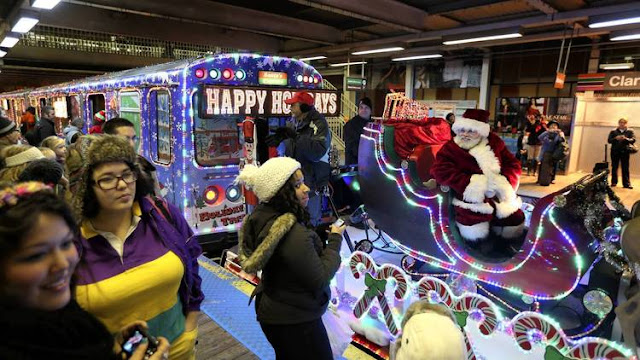 The Chicago Transit Authority (CTA) holiday trains and bus are a holiday tradition unique to Chicago, and in 2017 are sponsored by Jewel-Osco!
The Jewel-Osco CTA Holiday Train is a six-car train decked out in lights, holiday prints and comes complete with Santa on a sleigh in the middle of the train, bringing holiday cheer across the city and neighboring communities our rail system serves. On Saturdays, a similarly-decorated Jewel-Osco CTA Elves' Workshop Train also now joins and follows the first to help ensure everyone has a chance to enjoy this exciting tradition.
Complementing these two festive trains is the Jewel-Osco CTA Holiday Bus, which brings the same holiday spirit and joy to bus riders as it travels throughout Chicago’s neighborhoods.

What few may realize is that the Jewel-Osco CTA Holiday Train serves two very important purposes: to deliver joy and the holiday spirit to thousands of riders and also to deliver food baskets to various charitable agencies throughout the city.
The Holiday Train tradition began on the Blue Line in 1992 when a “Season’s Greetings from the CTA” sign was placed on the front of an out-of-service train that was used to deliver food to various charities. Over the years, this holiday tradition has evolved from its modest and humble beginnings to a spectacular, joyous sight to see – in daytime or nighttime.
Today, as the train pulls into each station, Santa waves to the boarding riders from his sleigh on an open-air flatcar carrying his reindeer and decorated holiday trees.
Both the Jewel-Osco CTA Holiday Train and the Jewel-Osco CTA Elves’ Workshop Train are wrapped with holiday and seasonal images. Outside, thousands of twinkling lights outline the shape of the train and windows, with even more lights running across the tops of the cars.
Strands of multi-colored lights are also strung inside the two trains along with red bows, garland, red and green overhead lighting and hand poles wrapped to look like candy canes. Riders will be greeted by Santa’s elves with plenty of candy canes for good boys and girls. 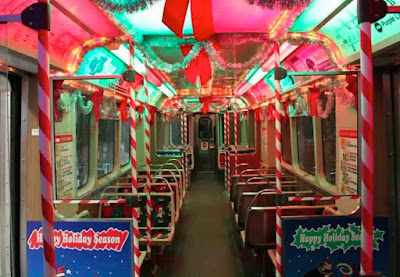 Our family continues its more-than-25-year tradition of supporting Chicago communities. Each year employees donate their time and money to purchase groceries and assemble food baskets for delivery to community organizations across the city. This year, we'll donate hundreds of food baskets to local community organizations.
Each food basket contains all the ingredients for a complete meal including a canned ham, potatoes, mixed vegetables, muffin mix, macaroni and cheese, fruit cocktail, green beans, corn and dessert.

Both the train and bus are in-service vehicles that operate as part of regular service; therefore, they cannot dwell at stations/stops for long periods of time. While every effort is made to accommodate riders, space is limited and boarding is not guaranteed.
To ensure everyone has an opportunity to see and take part in this annual tradition, here are a few suggested tips to make the most of your experience:
VISIT Transit Chicago for schedule info,Trip Planner, and more: http://www.transitchicago.com/

The CTA offers a range of features and services to provide transit that's accessible to people with disabilities. In short:
Though more than two thirds of CTA's system is now accessible and key station upgrade requirements under the Americans with Disabilities Act have long been met, multiple projects are under way make more of our stations fully accessible. The CTA also has been developing a roadmap to bringing our system to 100% accessibility! Read about CTA All Stations Accessibility Program (ASAP).
VISIT the CTA Accessible Transit webpage for more information, and services! 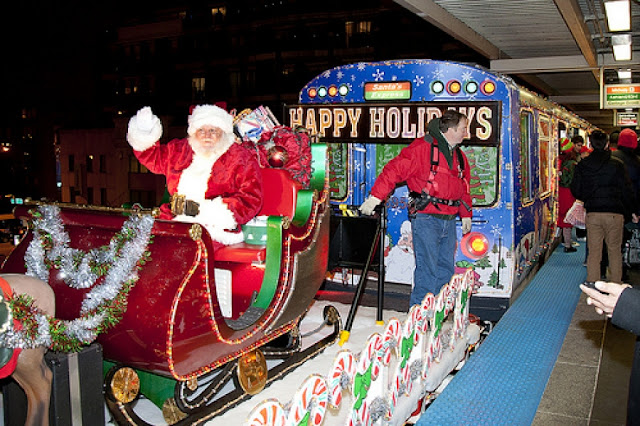 The Jewel-Osco CTA Holiday Train will travel all 'L' lines in late November and December as part of regular rail service. Normal CTA fares apply.
The train generally operates from about 1pm to 8pm on weekends and 3pm to 7pm on select weekdays (schedules for each rail line will vary), and will make stops at all stations along the respective routes. And every Saturday the Holiday Train is in service, additional Jewel-Osco CTA Elves' Workshop Train will follow to allow more to enjoy this one of a kind holiday experience.
Listed below are the dates that Santa will be taking photos on CTA’s Holiday Train.

Day or night, the CTA commutes of thousands and the streets of Chicago’s neighborhoods are made merry with the Jewel-Osco CTA Holiday Bus. Now in its fourth year of operation, CTA employees transformed a 60-foot bus into a winter wonderland as a way to say “thank you” to customers and bring added cheer this holiday season.
The exterior wrap features “Ralphie the Reindeer” leading the way with his crimson nose aglow and Santa’s sleigh in tow. Strings of lights outline the bus and its windows, while Ralphie is brought to life with 3-D antlers atop the bus and a ruby light affixed to the front of the bus.
Inside, the bus features multi-colored lights, holiday-themed seating, candy-cane striping, and one-of-a-kind artwork created by students from Skinner West  Elementary. In the very back of the bus is Santa and his workshop, which serves as the perfect setting for the scheduled photo sessions with Santa 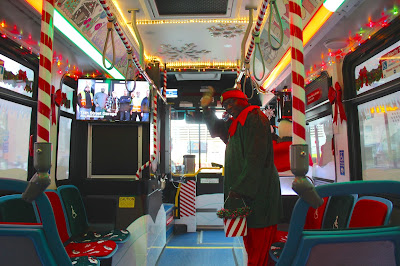 PRIORITY SEATING IS INTENDED FOR PEOPLE WITH DISABILITIES!