Online shoppers noticed a mug with an offensive phrase scrawled on it for sale on both Amazon and Walmart. It spelled out: "Got retard?" on one side. 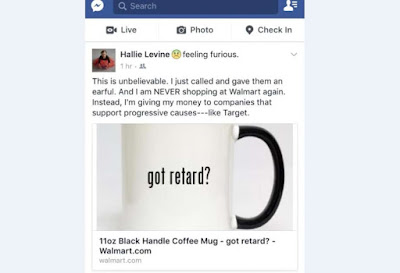 Article By Darla Guillen for the Houston Chronicle | Dec. 13, 2016
Hallie Levine, who's written for New York-based Daily News about Down syndrome, took to Facebook to express her disgust. She wrote: "This is unbelievable. I just called and gave them an earful. And I am never shopping at Walmart again. Instead, I'm giving my money to companies that support progressive causes -- like Target."

Levine's 8-year-old daughter was diagnosed with Down syndrome. She told the Daily News that it's made her sensitive to the word "retard."

"I think that in our culture it's still somewhat acceptable to use the word retard as a joke," she said. "It's horrible."

Levine's not the only shopper who's upset with both major retailers. Several others have posted comments on Walmart's site.

"This is sickening. I am very upset that this is a thing. I thought that people were finally starting to realize how hurtful this word was towards so many people. Please reconsider buying/selling this product. Think about it from another perspective," one comment reads.

As of late Monday night, Walmart stopped selling the item, and edited the live image to no longer reflect the slur.

A Walmart spokesperson reportedly told the Daily News that the item was being featured by a third party seller, and that it violated the store's policy.

Amazon has also removed the mug from its site.
http://www.chron.com/business/article/Walmart-Amazon-in-hot-water-after-selling-10793001.php
Posted by Jim Watkins at 9:06 PM