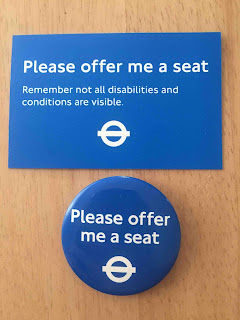 The blue badge, which reads "Please offer me a seat", and accompanying card were trialled for six weeks earlier this year.

In a statement, Transport for London (TFL) said the trial was in response to feedback from passengers and research.

"[The research] found that those with hidden disabilities and conditions, or those undergoing treatments, can often find it difficult to get a seat when they need one," the statement said.

The new badges were tested by more than 1,200 people, with the majority reporting easier journeys and feeling more confident asking for a seat.

James McNaught, who took part in the trial and had earlier created his own "cancer on board" badge, said getting a seat on transport could be difficult because it was not obvious to others why he needed one.

"When I was undergoing radiotherapy for throat cancer, it meant I couldn't talk to ask for a seat and the morphine I was taking made me appear drunk," he said.

"It was a real struggle to get people to understand why I needed to sit down.

"A badge and card will help make a real difference to the lives of people undergoing drug treatment or with longer term conditions or disabilities."
Posted by Jim Watkins at 5:59 PM