Hailing from one of the poorest areas of Cali, Colombia, and waging a constant battle with cerebral palsy, the world seemed dead set against him.

"When I was a young boy, a doctor told my mom that I would amount to nothing," said Aristizábal, 33.

Family support and a dogged spirit helped Aristizábal gain independence, and he set out to ensure other disabled youth could do the same. Launching a disability-advocacy foundation out of his parents' garage was one of the first steps in a journey that's taken him to law school and across the world. 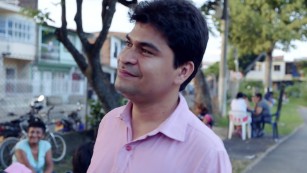 Now Aristizábal has been named the 2016 CNN Hero of the Year for his work providing educational and medical support for youth living with disabilities in Colombia. Aristizábal was recognized during Sunday's "CNN Heroes: An All-Star Tribute" alongside the other top 10 CNN Heroes for 2016.
The 10th annual show, hosted live by Anderson Cooper and Kelly Ripa, saluted everyday people doing extraordinary things to improve the world. Aristizábal was selected the 2016 CNN Hero of the Year after a six-week audience vote on CNN Digital and social media.

Aristizábal will receive $100,000 to continue working toward greater opportunities for disabled and non-disabled youth. All of the top 10 CNN Heroes for 2016 will receive a $10,000 cash award. Donations made to each of their designated nonprofit organizations are also being matched up to $50,000.
Article By Melonyce McAfee, CNN News | Dec. 12, 2016
FOR THE FULL CNN ARTICLE:
CNN Hero of the Year winner: 'God chose me to help'
WATCH "CNN Heroes: An All-Star Tribute" and "CNN SuperHero: Above and Beyond" on CNNgo.
Posted by Jim Watkins at 6:45 PM