Americans With A Disabilities Held One In Six Jobs Last Year 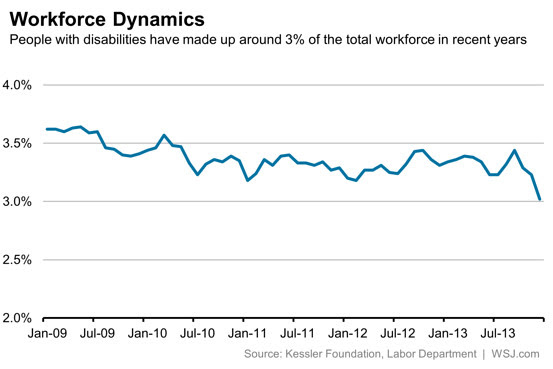 Almost 12% of Americans over 16 years old have a disability. But the group accounts for only 3% of those who have a job, according to a new Labor Department report.
In 2013, just over one in six — or 17.6% — of people who were disabled had a job, down slightly from the prior year. The report tracks workforce characteristics of people with a disability, which includes hearing, sight, cognition, mobility or other impairments.
The number of Americans with a disability and over 16 years old increased slightly to 28.6 million. The unemployment rate for people with disabilities fell two-tenths of a percentage point to 13.2%, a figure that measures people who did not have a job and were looking for one.
By comparison, 64% of Americans who did not have a disability had a job last year, up slightly from a year earlier, while the jobless rate was 7.1%. As of May, the unemployment rate had fallen to 6.3%, the Labor Department said last week.
Workers with a disability were more likely to be self-employed or hold jobs in production and transportation than their counterparts. But they were less likely to work in management or professional occupations.
One of the biggest challenges for some companies is overcoming fear, uncertainty and doubt to hire a person with a disability, said Rodger DeRose, president of the Kessler Foundation, a nonprofit that aims to improve employment and job-training options for Americans with disabilities.
“Companies are slowly engaging,” he said. “We’re seeing more of it with big companies now starting to actively participate in hiring.”
The Labor Department report comes as new regulations require federal contractors to ask their employees if they have a disability in an effort to reduce joblessness in the community. Companies must employ a minimum of 7% disabled workers, or prove they are taking steps to hire more, or else they could face penalties or lose their government contracts.
http://blogs.wsj.com/economics/2014/06/12/one-in-six-americans-with-a-disability-held-a-job-last-year/
Posted by Jim Watkins at 10:33 AM