Daniel Kevin Harris Who Was Deaf, Fatally Shot to Death After N.C. Trooper Traffic Stop, UPDATE with video of start of chase

State trooper Jermaine Saunders shot Daniel Kevin Harris (photo) to death on Thursday after what North Carolina Bureau of Investigation described in a statement as "an encounter." 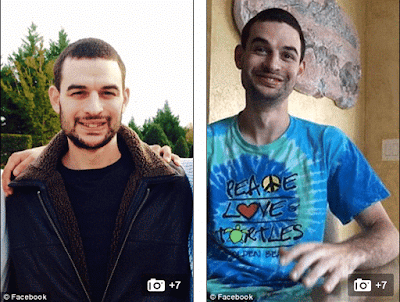 The bureau, which is investigating Harris' death, did not provide additional details. In an earlier statement, the North Carolina Highway Patrol said that the trooper tried to pull over a Volvo for speeding.

A brief pursuit followed, the statement says, and the driver, who is not identified, left his car.

But a neighbor of Harris', Mark Barringer, who witnessed part of the confrontation, criticized the trooper's handling of the pursuit.

"They should've deescalated and been trained to realize that this is an entirely different situation," Barringer told NBC affiliate WCNC. "You're pulling someone over who is deaf. They are handicapped."

Howard Rosenblum, CEO of the National Association of the Deaf, said in a statement to NBC News that "there have been too many incidents with tragic consequences between law enforcement officers and deaf people."

Too often, Rosenblum said, officers order deaf people to comply with verbal commands — then act aggressively when they don't.

"This has led to many physical altercations between law enforcement officers and deaf individuals over the years, with some resulting in death," he said.

Intensive training should be required for officers, Rosenblum said, and some should be trained to communicate with people who are deaf or hard of hearing.

On a crowdfunding page said to be set up by Harris' family, a post says that any additional funding raised for a memorial will go toward educating and training law enforcement.

The page says that Harris was unarmed when he was killed by the trooper, although authorities didn't comment on whether he had a weapon or not.

The post adds that states should change their DMV registration systems so that a police stop triggers an alert showing that the person is deaf.

"With this change," the post says, "Daniel will be a hero in our Deaf community."

FOR A VIDEO REPORT BY NBC NEWS, VISIT: http://www.msn.com/en-us/news/us/nc-trooper-fatally-shoots-deaf-man-after-traffic-stop/ar-BBvVDA4#image=1
# # #

UPDATE 08/26/2016
WSOCTV.com has posted the Raw Cellphone Video of the start of a portion of the pursuit that ended in the shooting death of Daniel Kevin Harris.
For the full report visit WSOCTV.com at: http://www.wsoctv.com/news/local/exclusive-video-shows-what-appears-to-be-part-of-chase-before-trooper-shoots-kills-deaf-man/429858803
(if video is removed or does not play please let us know in comments -TY)
Posted by Jim Watkins at 6:51 AM