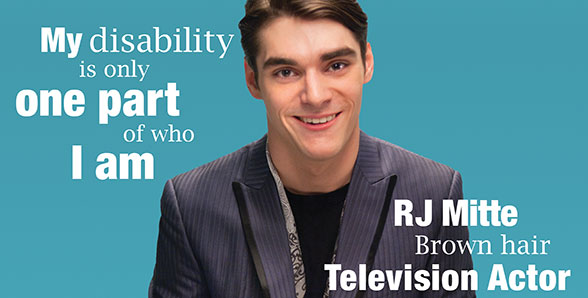 Ahead of covering the upcoming 2016 Paralympic Games for U.K. network Channel 4, Breaking Bad actor RJ Mitte is using his platform to call for greater representation of people with disabilities in popular media.

report by JOEY NOLFI for Entertainment Weekly | Aug. 25, 2016
“I’m really looking forward to co-presenting the Paralympics and I truly hope Rio 2016 will open up further opportunities for other disabled actors in TV,” Mitte said during an appearance at the Edinburgh TV Festival.

The Irish Examiner reports the actor also said the Paralympics coverage, with a majority (75 percent) of its presenting team being people with disabilities, is in a unique position to help raise awareness about and change global attitudes regarding representation.

'If we can make this happen, we will in turn help change attitudes towards disability,' he said

The 24-year-old, who played the teenage son of Walter (Bryan Cranston) and Skyler (Anna Gunn) White across five seasons of the hit AMC drama, was diagnosed with cerebral palsy at just three years old. His character on Breaking Bad, Walter White, Jr., also had the condition.

“I wouldn’t be in the position I am in today without my disability. I utilized everything I know about living with cerebral palsy for my role in Breaking Bad,” the publication reports the actor said at the festival. “It was my acting ability that landed me the role, although my disability helped get me the part of Walt Junior – like everyone else, I went through a gruelling audition process.”

Also according to the Examiner, 2014 research found only 2.5 percent of people in major roles onscreen had a disability. A study by the U.K. charity Scope surveyed nearly 3,000 people with disabilities, finding that 40 percent of them felt like the general public did not understand their needs. The same study indicates there’s a necessity for “more disabled people as role models and in the leadership positions which are responsible for championing change,” including roles on TV and in films, because positive representation leads to “greater visibility of disabled people and [reduces] the stigma and discrimination towards disability.”

“If we can make this happen, we will in turn help change attitudes towards disability across the world,” Mitte said.

For a companion Video Report to this article, visit Entertainment Weekly at:
http://www.ew.com/article/2016/08/25/breaking-bad-rj-mitte-disabled-media

Email ThisBlogThis!Share to TwitterShare to FacebookShare to Pinterest
Labels: Paralympic