Thanks to all that shared this wonderful article, from many news sources

A report by the Social Security Administration (SSA) found that "one in three, or 35.2 percent of people getting federal disability insurance benefits have been diagnosed with a mental disorder." The SSA reported that "disabled beneficiaries have increased 49.7 percent over the past decade" and the "largest 'diagnostic group' for disabled beneficiaries was a mental disorder.' Moreover, not only are the majority of people who are receiving disability benefits suffering from some form of mental illness they are largely diagnosed with a mood disorder. 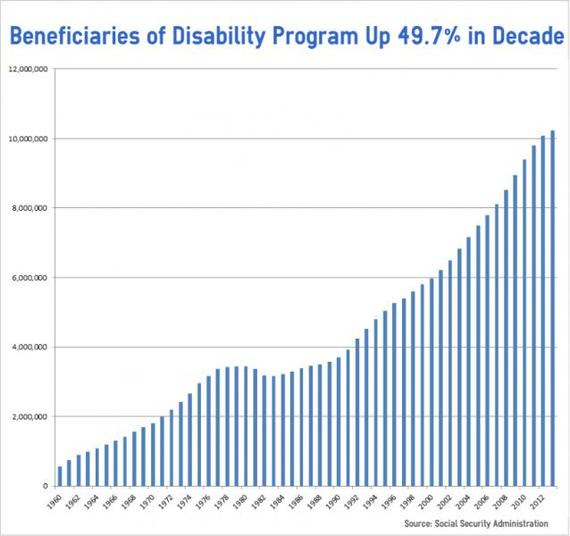 As the pillar of journalistic integrity and high quality news reporting, Fox News Radio host, Tom Sullivan, took to the air to talk about all of these lazy bastards receiving disability benefits:

On Wednesday's show, Tom said there are too many Americans with 'mood disorders' who are gaming the system by collecting disability! He argued that many of these people can still work and support themselves.

You know, all of these people with their imaginary illnesses, like bipolar disorder, need to pull up their bootstraps and stop their parasitic sucking on the American people's resources. You know, so we can better fund, like, the military or something.
In an attempt to educate Sullivan, Aunglee from Saramento, called in to talk about her bipolar disorder and how the benefits she receives are integral to living a healthy and happy life. I have to give Aunglee credit because she was so calm and level headed it was incredible because frankly, I lost my shit just listening to their conversation.
Media Matters for America (MMfA) transcribed the interview in full and you can listen to it there, but here's my favorite part. Sullivan actually had the balls to tell this woman that her bipolar disorder is "made up" and is a "fad" perpetuated by the pharmaceutical industry:

Bipolar disorder isn't some Hollywood trend like juicing or detoxing. It's a disease that psychiatrists can diagnose and treat with medication, or some people are really lucky and can manage their moods just with therapy. Bipolar disorder is a disease that wreaks havoc on families and ends lives. Bipolar disorder isn't just the ups and downs of regular life. It's not just being sad because your hamster Fluffy died. It's wanting to drive your car off of a bridge because you're experiencing suicidal depression. It's not just about being happy, it's about being so manic that you start to believe you are the second coming of Jesus Christ -- but someone could totally go to work then, right?
I have bipolar disorder and have been on sick leave for almost five months. My hypomania caused rage that made me afraid of myself and what I might do. My depression was so crippling that all I could do was cry for hours on end. If dealing with the mood fluctuations wasn't enough, I was a guinea pig for medication adjustments that cause further intense mood swings and side effects. These medications made me dizzy, made me forgetful, made me nauseous, and gave me crippling headaches. At multiple points in my recovery I couldn't string a sentence together, and as a writer that is something that is extremely important to me. And let's not forget, the drowsiness. I spent almost a week sleeping because I literally couldn't open my eyes. But it's not a disability, right?
But bipolar disorder "didn't exist 25 years ago" until Big Pharma got involved. You know, because according to Sullivan, bipolar disorder is "made up by the mental health business just to be able to give people prescriptions."
Actually, 25 years ago, people with bipolar disorder were called manic depressives. The term manic depression was coined in 1899 by German psychiatrist Emil Kraeplin who developed the classification system for mental illness. The term bipolar disorder wasn't used until the 1980s when the DSM-III was released, which was seen as a revolutionary text in psychiatry (DSM-III and the transformation of American psychiatry: a history). So the disease has existed for over a hundred years, but bipolar disorder is just a fad, right?
So why change the name of an illness that had existed for over 80 years? Stigma (surprise, surprise!) In the introduction to her book, Bipolar Expeditions: Mania and Depression in American Culture, Emily Martin cites a 2002 press release by the Depression and Bipolar Support Alliance who were changing their name from the National Depression and Manic Depression Association because, "many people are frightened by the term "manic depression" and this keeps them from contacting us for help."
I often get asked why I speak so openly about my experiences with mental health and it's because of people like Tom Sullivan. Every day of my life, I battle against my disease. Every day I take pills that are somewhat poisonous to my body, not because "somebody's talked me into feeling and thinking this way" but because they are my lifeline. They are literally the only way I can function like an average person and even then I have mood blips that aren't "normal" (whatever that means).
So before you start to discredit someone's lived experience with mental illness, maybe you should shut up and listen. Or, at least read a book.This post was previously published on Mad Girl's Lament.
Have a story about depression that you'd like to share? Email strongertogether@huffingtonpost.com, or give us a call at (860) 348-3376, and you can record your story in your own words. Please be sure to include your name and phone number.
Need help? In the U.S., call 1-800-273-8255 for the National Suicide Prevention Lifeline.
http://www.huffingtonpost.com/marisa-lancione/bipolar-disorder-isnt-a-f_b_6591058.html
Posted by Jim Watkins at 8:00 PM