wanted to share this article, and anyone that knows me knows I never get nasty (OK now stop laughing) - Jim..

We disabled comedians have always enjoyed focusing on the unusual things the public says to us, it has proved a rich vein of comedy, as there's seemingly no end to the range of bizarre reactions we can get.

In the past, strangers have mistaken my cerebral palsy for drunkenness and, when taking my kids out trick-or-treating, neighbours have handed sweets to me instead of to my kids. I have assumed they were being patronising but, as I use a power wheelchair, maybe they thought I was dressed up as Davros, Doctor Who's arch-nemesis.
A drawback to bringing up awkward disability moments in front of a mainstream comedy audience is that you may be asking them to laugh at things they may have done themselves. So disabled comics have to work hard to create an atmosphere where it's OK to laugh.
Humorous though it often is, concentrating on what members of the public say is only one side of the story. The other side is me, and how I respond to it. You see, if I'm completely honest, I handle those interactions very badly. Very badly indeed.
In my Edinburgh Fringe show I recount times where I've reacted by losing my temper and screaming blue murder to the amazement of onlookers, calling an esteemed colleague an obscenity, making a waiter cry and biting a policeman's ankle.
Why do I lose my temper? Sometimes it's because I've had a bad day, other times I've had my space invaded, but most often it's caused by what I'm beginning to realise is a serious aversion to other people being polite, helpful... or nice.
Everything you've ever seen and read, tells you to be nice. When we were kids our parents told us to be nice. At that age we never listened but maybe the world would be a better place if we still negotiated using only the threat of wedgies and wet willies.
I've come to hate nice. To my way of thinking, nice is not nice. Nice is in fact bad because nice causes me problems.
Let me explain nice. Although I'm a wheelchair user, I can walk up steps if I take my time and use a handrail. It may look like a horrific accident waiting to happen, but I'm actually quite steady. What gets in my way, however, is someone being spontaneously nice by grabbing my arm to give me support which can cause me to lose my balance and fall.
If a total stranger accosted you and made you tumble down a flight of steps, you'd be justified in telling them where to shove it. But when they act nicely, with the best of intentions, supporting me because they're worried I might fall. You can't shout at them and feel good about it. Perversely, in some ways I find open hostility easier to deal with.
Being nice to others requires anticipating their needs and desires. What I need is to be left alone. What I desire is peace and quiet. Nine times out of 10 the public get this horribly wrong.
Another example. When I'm out shopping, I'm often asked if I would like an item fetching down from a higher shelf and, before I have the time to reply, they pass it to me. The person is always trying to be helpful but since when was an offer of help a rhetorical question? I don't know how to deal with this stuff now - it happens so often. Laurence at home with his family, trying to be nice...
The other week I had a supermarket assistant follow me round the store for ages, offering help. I repeatedly said no thanks, tried shooing her away and even told her I'd throw a bag of wholemeal penne pasta at her, but she just kept smiling. After an hour I had a basket overflowing with groceries I never wanted which I then had to ask someone else to put back on the shelves for me. But this person also didn't understand my cerebral palsy speech pattern so smiled at me a lot, even though I could have been asking for his PIN number. All very polite and nice but terribly infuriating.
'd like to think that it's perhaps understandable why I don't always respond to niceness with niceness but there are a number of past incidents which have left me with feelings of remorse. For my Fringe show, I've set myself the challenge of revisiting some of these moments of instant regret and trying to make amends.
Having recently hit 40, I'm a bit more chilled out and don't get quite so wound up. I've come to realise that my stand-up material shouldn't just be about giving positive PR for disabled people, so I've created a show in which I look at how unpleasant I can be.
Surely there's room for a bit more honesty now that portrayals of disabled people are broader. Equal representation should include those times when we get it wrong and, like me, behave like an idiot. 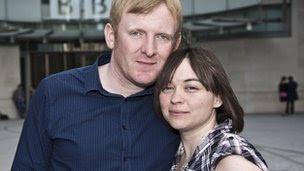 Laurence Clark was on this month's Ouch podcast. You can download and listen to it here.
Laurence Clark's new show, Moments of Instant Regret, will be on at the Assembly George Square, Edinburgh, from 30 July to 24 August, part of the Festival Fringe.
Follow @BBCOuch on Twitter and Facebook, and listen to our monthly talk show
http://www.bbc.com/news/blogs-ouch-28342833
#########
FROM Laurence Clark's YouTube channel https://www.youtube.com/channel/UCCZtg4pSxB-FlxmhVfsXv9A